In just under 64 minutes, 64 Squares takes you deep into the mind of ‘B’. B wants to share his memories with you. He wants to tell you how he came to be on an ocean liner bound for a new continent and a new beginning – what moments and choices in his life led him down into the underbelly of the S.S. Triumphant, attempting to best a peasant prodigy and world chess champion at a game of chess.

Only there’s one slight problem…

“You might have noticed there are four of me,” B says. “Don’t worry. You’ll get used to it.”

You will, and you do. 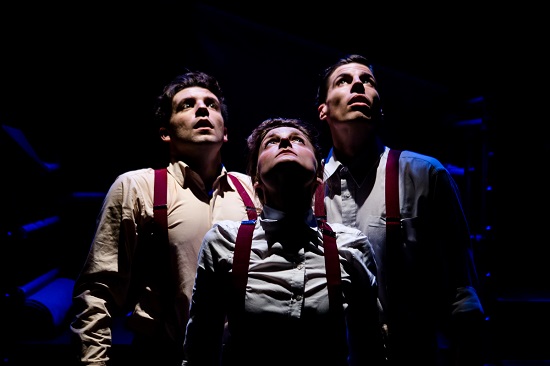 Such is the collective talent and will of this ensemble that it doesn’t take long at all before you become fully engrossed in the machinations of B’s mind and his memories, which unfurl and unfold over the hour with the same anticipation and complexity of a world championship chess match.

The set design is pretty simple – a basic tower of scaffolding on wheels sits centre-stage, dressed with various props, whilst musician Fred McLaren and his drum kit sits off to stage right – but it is utilised with supreme confidence and exactitude by the performers (Julian Spooner, Matthew Wells and Roisin O’Mahony), who are consistently impressive.

In order for the central conceit of one mind split into four to work, the ensemble has to be convincing both apart and together. This, for me, is the production’s biggest strength. The oneness that the actors achieve is, at times, spellbinding. Their combined fluidity of movement and unity of purpose in their creation of the character of B is quite hypnotic, and little things throughout prove hugely effective, such as the overlapping and layering of voice and movement to create cacophony and evoke the confusion of a mind at war with itself, trying to clutch and grab at details it no longer remembers.

The end result is a fascinating and affecting exploration of one man’s descent into madness, under the long dark shadow of the Second World War.

64 Squares describes itself as a one man show performed by three actors and a drummer. I would describe it as a masterclass in precision and the power of storytelling.