This is a new one act play, with a running time of just over 95 minutes, by Nicola Gardner. If you take the ideas behind Loose Women and The Dinner Ladies, put them together in multicultural heaven, and set the whole thing in a Manchester city centre community centre, you might get some flavour of what the essence of this play is.

There is no exposition and no development. The play relies totally on gossip style dialogue, but some of the lines really are quite hilarious.

"What is a hashtag anyway? I know what the two words mean separately but don't understand them when put together!"

The only character to go on any sort of journey at all is Robbie, a white caretaker of the Community Centre who has a shrine to Bob Marley in his office and wears a Jamaican hat with false dreadlocks and talks in modern patois slang. He is writing a poem about the blacks and joins in their cause for recognition and equality, despite being rebuffed and ridiculed by the members of the Community Centre who really are West Indian. This part is played with truth and panache by Mike Coombes. 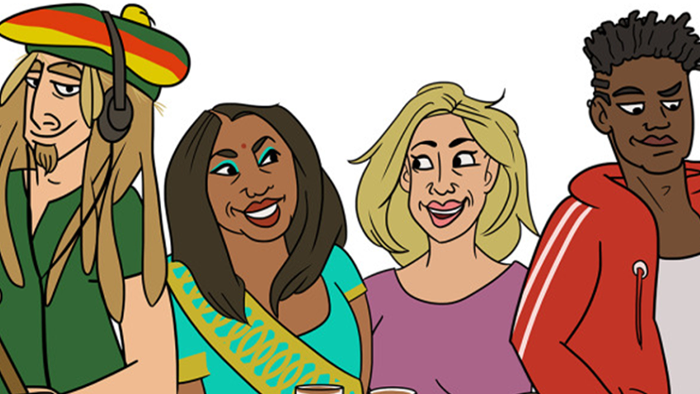 Other characters include the two West Indian 'Bros' who sit and bicker, gossip and laugh about life, and along with their respective partners, bring a little Caribbean madness and logic into the show. Both playing much older than their actual years, these were Declan Wilson as Myers and Tony McPherson, proving also that he had a very beautiful and sonorous bass-baritone voice, as Leroy.

On the other side of the stage Anisha ( Savera Haque ) and Bev (Lynne Payne ) were a couple of cleaners skiving from work during their morning break, which morphed into lunch, which morphed into afternoon break Completely separated from the West Indian group, these two ladies could easily have been in a different play. In fact it did feel like, at times, that I was watching two completely different and unrelated sketches.

The problem here was with the directing. The play was performed in thrust formation. This means that there is audience on two opposing sides of a long 'runway' style stage. It is absolutely the hardest configuration of staging for any director to work with, especially when given a play which is very static, as this one was. Sadly then, director John Klark did not make full use of the space, setting the action at either end of the thrust, with precious little ever happening in the middle.

The play is very funny, but in its present format doesn't really have a life. It would work better perhaps as a radio comedy, or a set of sketches for TV. It has very much a TV sitcom 'feel' about it. If you are wanting to be taken away from the hardships of the daily grind, then spend an hour and a half in their company; it is inconsequential and insubstantial but it will make you come away with a smile on your face.