Alan Bennett’s The Madness of George III, directed by Adam Penford, tells the story of one of the first periods of George III’s illness which plagued the later years of his life and eventually led to the Regency of his son George IV. Wryly amusing and horrifying for its exposition of tortuous Georgian treatments of mental illness, this is a wonderful play which juxtaposes the appearances of royalty and the regular lives hidden beneath.

The play has a very grand opening which emphasises the importance of show for the Royal Family from the start. An assassination attempt is made on George III’s (Mark Gatiss) life and the Court points out how lucky the failed murderer is as England has asylums for her to go to whereas in France she would be executed, the veiled point being that for many life in an English asylum during this period was a fate worse than death. 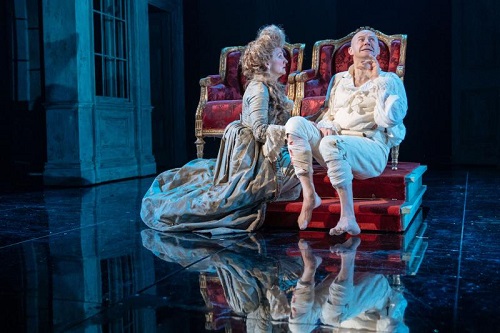 The King’s eccentricities are evident from the start of the play and he is clearly very stressed about the situation in America which he and Pitt (Nicholas Bishop) steadfastly avoid discussing. Gradually the King begins to struggle with both his memory and speech before his illness culminates in a number of physical symptoms which accompany a complete breakdown.

Doctors Baker (Stephanie Jacob), Warren (Louise Jameson), Pepys (Amanda Hadingue) and Willis (Adrian Scarborough) all have different methods for treating the King, all of which appear equally barbaric and shocking through the eyes of the modern world.

As the King deteriorates the people around him continue to try and treat him the way they always have, while talking about how they can use the situation to advance their own interests. With Fox (Amanda Hadingue) determined to install the Prince of Wales (Wilf Scolding) as Regent so he can seize control of the Government from Pitt, and the Prince of Wales banishing Queen Charlotte (Debra Gillett) to prevent her aggravating the King’s symptoms, it isn’t long before the Royal Household is entirely unrecognisable.

Luxurious scenery is paired with extravagant period costumes which beautifully represent the splendour of Royal life while contrasting the beauty with the heartbreaking reality of the King’s distressing illness. Scene changes are done by the actors themselves, cleverly appearing as servants cleaning the palace in the half light.

Gatiss is outstanding as the King, combining a desperate clinging to pride with a passionate portrayal of the devastating symptoms which plague him. His body language and facial expressions are exceptional. The chemistry between him and Gillett is very good, creating a tender and loving relationship.

Hadingue is excellent as both the vicious and manipulative Fox and the obsessive Dr Pepys. Jacob’s Baker is also very funny and Bishop’s Pitt exhibits a cold detachment which is mesmerising. Scolding’s portrayal of the Prince of Wales is wonderful for the depth of its shallowness and comes across as realistic and not a caricature, which is a very easy trap to fall into with this role.

Combining laugh out loud comedy with tear-jerking tragedy in Bennett’s classic style, this is a compelling play which tears open the brutal treatment suffered by individuals with mental health issues in the past, and shows the effects of a rapid deterioration of health on the individual, the family, and in this case, the country. In a nation which puts Royalty on a pedestal only to remain determined to tear them down because they are no different than the rest of us, this play unequivocally illustrates both those points in brutal detail while maintaining a wry humour of the sheer silliness of all of it throughout.

The Madness of King George III is being streamed on YouTube until the 18th June 2020 https://www.youtube.com/watch?v=fofiKCV9wGc