The Music of Finn Anderson – The Barn Theatre

Before watching this concert, I had not listened to any of Finn Anderson’s music, so I was curious to listen and to find out why The Barn Theatre had singled his music out for this concert.

Introduced by Producer, Jamie Chapman-Dixon and joined by Finn Anderson; all remotely of course, the show began with Rebecca Jayne-Davies singing a song called ‘Taking on Government’ which is from a musical that Anderson is currently working on about the fight to save an allotment garden from being developed. Despite the theme, the song was wonderfully catchy and well delivered by Jayne-Davis. We then moved on to Nicholas McLean singing ‘Hitchcock’, which is one of the numbers not from a musical and was Anderson’s first heartbreak song. 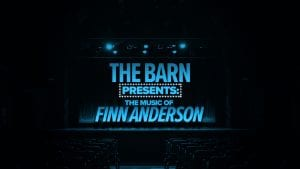 Next up was a song from the musical ‘A Mother’s Song’ and the song is called ‘Used to Say’, a duet between Claire Marie Hall and Rosalind Ford. Singing a duet when the singers are not together must have been a challenge, but it was beautifully timed and performed.

Christina Bianco gives a powerful rendition of ‘Sophie’s Apocalypse’, which is a song about impending doom, and all the media hype surrounding a prediction that the world is going to end.

The tight editing of the show means that it neatly links together with Anderson telling the story behind each song. Next we are back to the allotment with a song called ‘Garden in my Mind’. Sang by Emmanuel Kojo, this song expresses the character’s anguish as he faces losing his allotment, after putting a challenging past behind him, his mental health is at stake. Brienne Keller gives us a colourful rendition of ‘Chip Van’, which comes from a musical which is currently under development called ‘Bow Maker’.

In another powerful rendition, Oliver Ormson (recently having performed in Back to the Future), sings ‘Snowstorm’. This has been cut from a musical which is a shame as it is a wonderful piece, hopefully Anderson will find a home for it somewhere.

Finally, we saw Joanne Clifton singing ‘Flick the Switch’ which Anderson wrote when he was only 16/17 years old. A second duet between Ella Young and Matt Henry MBE called ‘300 Feet’ from the musical ‘Streets’. Is a love duet about a secret relationship. Once again, the duet was harmonious. Danielle Hope completed the set, with a song from ‘A Mother’s Song’ called ‘Change of Plan’, about facing her impending motherhood whilst rediscovering her past.

The Barn Theatre team have done a fabulous job of making sure this is a very professional concert. The added narrative from Finn Anderson, gives us a glimpse into his musicals and is especially handy, if like me, you are new to his music.

The editing works well to connect the performances and it was a nice touch to ask the artists to introduce their own acts. Considering the concert was pulled together with the artists performing in their own homes, it was very sleek, and the wonderful performances made the quality of the song writing shine through. I will certainly be looking out for Finn Anderson’s work in the future.

Like many theatres in the current climate, The Barn Theatre need to raise money to stay afloat. The Barn Theatre is not simply a theatre for Cirencester and the local area, but it offers workshops, performing arts tuition, subsidized and free tickets to local charities, encourages self-expression to help with personal growth and development for young people. As a charity itself, the theatre is not subsidized so needs donations to be able to continue.

To watch the concert follow this link https://www.youtube.com/watch?v=1sVYFEyJ7Vs Please also remember to donate if you can afford to do so by going to https://barntheatre.org.uk/sob