The third week of January is a difficult week during which to conjure up any enthusiasm. It is constantly cold and dark, pay day is a distant speck on the horizon and all the joy and anticipation of the festive season is a distant memory. If you’re reading this and nodding emphatically, then can I suggest that what you need is to spend a colourful, smile-inducing evening with Joseph and his rather snazzy technicolor dreamcoat.

The musical needs no introduction, having run in the West End on and off since 1973, most recently just last year at the London Palladium. A collaboration between Tim Rice and Andrew Lloyd Webber, the musical score is bold and packs all the drama and punch of Lloyd Webber’s work while being deliciously humorous, cheeky and camp. 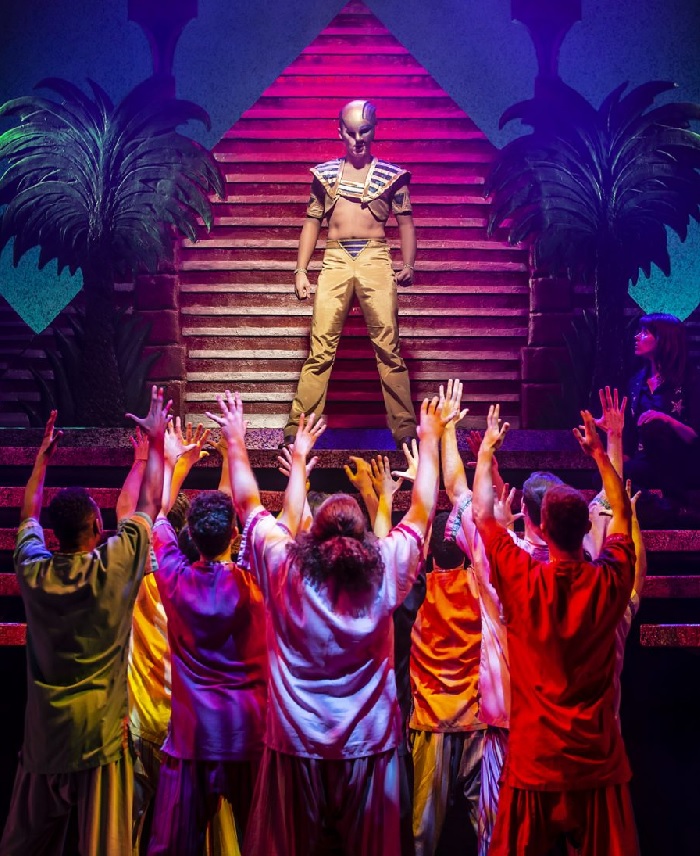 After a strange opening, with a medley of the show’s tunes performed for a good five minutes with nothing on stage but a screen, the show opens with the whole cast assembled for the classic song ‘Any Dream Will Do’. The affect is magical and sets the tone for the rest of the performance.

Mark McMullan – who many will know as a recent Britain’s Got Talent finalist – makes his professional debut here as Joseph and gives a stellar performance. Vocally McMullan is very strong – I’m always slightly nervous to hear actors taking on epic show tunes but right from the off McMullan’s talent is evident and you know you’re in safe hands. The first act has some really powerful and well-known numbers, such as ‘Jacob and Sons’ and ‘Go, Go, Go Joseph’, all delivered with high energy from the cast including Joseph’s 11 brothers, who all bring something special to the performance. The chorus also features a large young choir who are on stage throughout and manage to add to the performance without being distracting.

The first act is shorter than the second but also seems to move more quickly, due in part I’m sure to the punchy upbeat musical numbers which are genuinely a lot of fun. The narrator, Alexandra Doar also makes her professional debut here and really seems to come into her own during ‘Go, Go, Go Joseph’ at the end of the first act, picking up where she leaves off in the second act and sailing through on a high. At times she felt a little still, but her expression and delivery were both superb and she looked totally at home on the stage.

Although I did question some of the costume decisions – not least Joseph’s Ugg boots – overall the set and design are considered and stylishly put together, and really bring Egypt (via America and Paris) to life. The second act in particular features some stunning Egyptian scenery and some very fine costumes for some of the cast – not least the Pharaoh, or is he The King…? I was also delighted to see the brothers return, with some slick choreography and some more catchy tunes.

The show hits a real high towards the end and the buoyant energy is fiercely contagious. I’m never one for clapping along – don’t ask me why, I guess I’m not much of a joiner-inner and I also find myself getting annoyed at how quickly people lose time – but on this occasion I couldn’t help myself and even found myself grinning manically as the whole experience was just so damn happy. Although it did go on a bit…

Overall, the performance is as colourful, bright and full of fun as the name suggests. The Technicolor Dreamcoat is the perfect antidote to the January blues, and guaranteed to put a smile on your face.

Joseph and the Amazing Technicolor Dreamcoat continues until the 25th January: https://www.atgtickets.com/shows/joseph-and-the-amazing-technicolor-dreamcoat/new-wimbledon-theatre/