Crisis? What Crisis? - The Colab Factory

It is 1979. The Labour government is facing a critical vote of confidence which could lead to its fall.   The economy has had to be rescued by an IMF bailout, inflation is skyrocketing, after years of pay restraint the trade unions are threatening strike action and civil unrest is mounting.   This is scenario, based on UK in 1979, which Parabolic have taken for their latest immersive theatre production.

The meticulous preparation and attention to detail in the setup of this production is obvious from the moment of entering the large room in The Colab Factory setup with tables and chairs, period telephones and fax machines, television relaying news footage of the time and wall displays showing amongst other things the status of unrest in the country and the voting predictions of MPs. 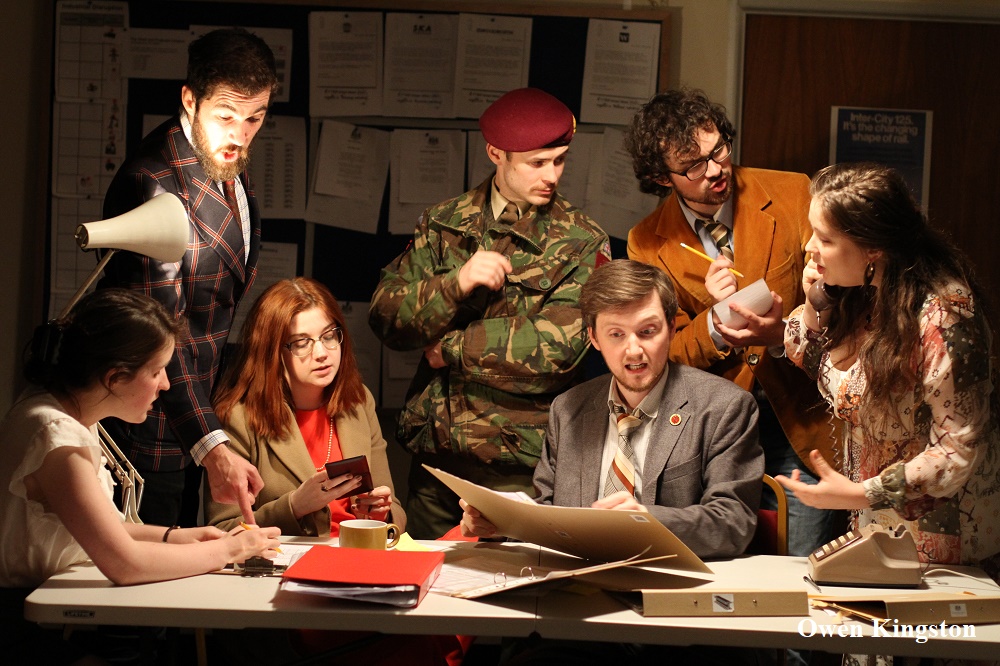 The action starts with Tom Black as David (who also devised the piece) explaining the scenario and dividing the attending audience into groups; one which will work with him on press publicity, another who responsible for political wheeler-dealing led by Jennie (Beth Jay) and the Treasury team trying to control the country’s finances led by Karen (Zoe Flint). Each group is provided with a series of actions to complete; mainly trying to negotiate with trade union leaders to prevent strike action, persuading rebel MPs not to vote down the government and the hapless Treasury team trying to rein in the spending commitments which these inevitably involve.

Members of the audience self-select to undertake particular tasks including using the real telephones to phone key interlocutors for high-pressure discussions. From time to time announcements are made or high-profile visits by key interlocutors occur which set off another round of hectic negotiation activity. Whilst there is a certain amount of choreography to keep it on track the direction in which the evening takes is largely up to the interaction and initiative of audience members. This does have the potential for some of the scenarios to verge into fantasy; although with hindsight selling the Falkland Islands in 1979 might not have been a bad option!

The energy and commitment of the main team of actors was extremely impressive and behind-the-scenes there were a large number of others manning the phones and keeping the whole thing on track.   At times the entire room was buzzing with energy and it was impossible to keep track of everything that was going on; which I suppose is typical of major crisis management exercises.

There was no need for all the audience members to take part all the time if they did not wish to; there were comfortable seating areas and a small bar to provide relief from the intensity of the action. Nevertheless this is undoubtedly an evening where the more you put in the more you get out and it is not really a spectator event.

For anyone who enjoys role-play and is interested in the mechanics of political crisis management I think this would be an extremely enjoyable evening. If you prefer your theatre more à la carte this is perhaps not for you.