bottled. is a comedic yet eye opening play written by Hayley Wareham, in support of women’s aid and as part of this year’s Vault Festival. bottled. tells the story of Katy, a “keen-eyed and sharp -tongued” teenager desperate to live a normal teen life. Unfortunately, when her mum Sharon marries Brian their lives begin to deteriorate, drastically. However Katy refuses to allow herself to be silenced. bottled. explores the effects of domestic abuse and the repercussions of underfunded and overlooked support services seemingly available to those suffering.

Upon arrival the set is fairly simple, the stage is decorated with a stream of fairy lights, a few weighted balloons, a microphone and a cake on a stool. It is soon clear to see that with a storyline as heart wrenching and hard to swallow as bottled., as little distraction as possible is needed in regards to set, props and costume. Therefore, allowing the audience to fully absorb what they are watching and experiencing. Wareham and director Chris White allowed the script and physical direction of the piece to mould together with such chemistry and ease, elaborate costumes in attempt at distinguishing roles would have been completely unnecessary and the cast benefitted from simply sporting casual tops, tracksuit bottoms and funky socks. 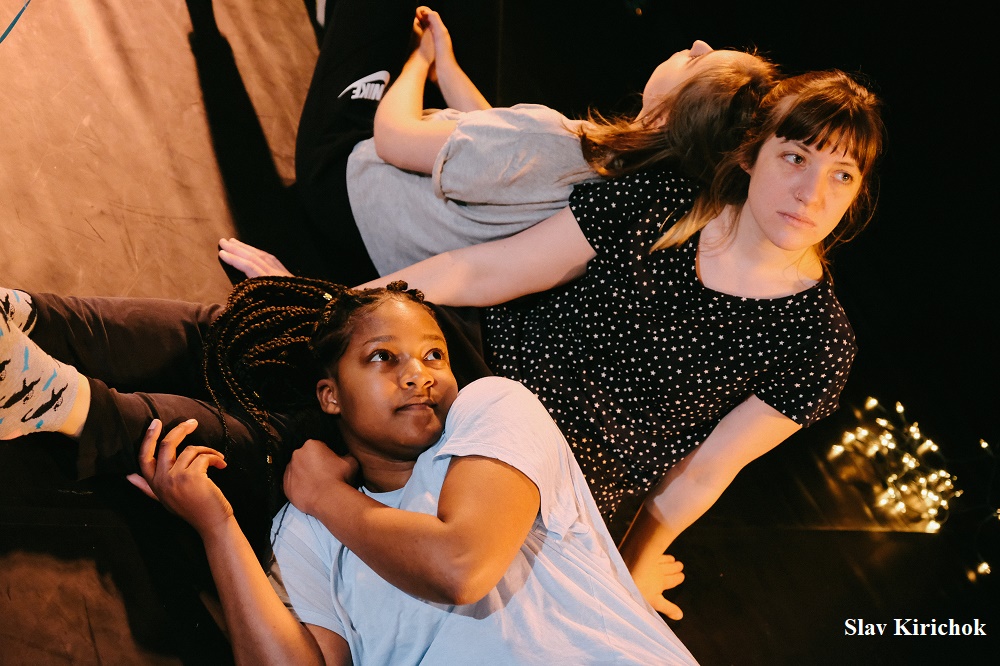 Multi-rolling is a frequently used technique in bottled. and one that is pulled off with success. Actresses Alice Vilanculo, Isabel Stone and writer Wareham make the cast of three who consistently alternate between characters throughout, at times they play Katy in unison, projecting and allowing their combined voices fill the space. Sometimes they switch in such quick procession you hardly have a chance to gather who is Katy and who is someone else, however you always do as through the use of accents, facial expressions, volume and especially physicalization the cast work together with such confidence and fluidity you always know where you stand.

Considering bottled. is such a devastating and hard hitting piece, Wareham was extremely successful in finding the balance between comedy and seriousness. There were times when the audience couldn’t stop laughing at the youthful, casual vibe of the cast, the strong comedic elements such as incredulously vivid imagery and one liners which Vilanculo seemed to nail every single time.

There were times when the unison was slightly out of sync, although the cast were very aware of one another and themselves and would either jump on the end or hold back from joining in and that showed true professionalism and teamwork. The Vaults is an incredible space for fringe and new theatre, and has continued to blossom and grow, however due to the location of the space there were times when the cast could have benefitted from projecting ever so slightly when a train happened to make itself known overhead.

All in all, I would recommend bottled. to everyone and anyone as it deserves to be seen by all, not just because of the imaginative writing and talented cast but because it is vital that everyone is exposed to the dangers, truths and repercussions of domestic violence. https://vaultfestival.com/whats-on/bottled/