Directed by the lauded Tatty Hennessy, his production and indeed the entire tour aims to bring the art and practice of theatre right back to its earthy, ethereal, roots by bringing Shakespeare into the square again.

Performed as it might have been centuries ago, the players employ no microphones or special effects, instead relying, too much audience appreciation, entirely on their own devices. Every actor is a master of multiple roles both on and off stage, as they also provide the ambiance with backstage harmonies and musical accompaniment, which washes pleasantly in an organic way over the audience.

The stage is set loosely between two towering trees strung with rose, red and orange coloured fabric, in the secluded Arundel Gardens. It is lit, but minimally, and I only notice this as the summer sun finally sets at the shows musical finale. 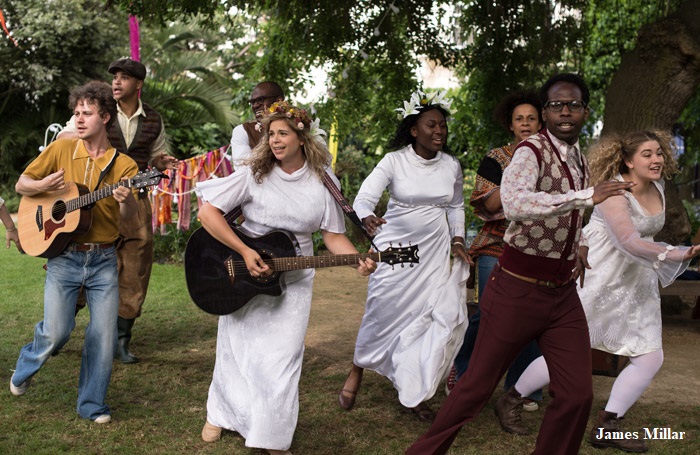 The very heart of Notting Hill might be as gentrified as it gets in London; perhaps most fitting for a play about the nobility and their fickle fancies of love and lust. As the Dukes and Duchesses play their parts across this private lawn bordered by the gardens and patios of residents, up above watches the eyes of the modern wealthy; ironically vying with the leafy canopy for an angelic perspective of events down below.

But what events they were: the crowd was captivated and catapulted into an otherworldly amalgam of the 1960 and 70s- presumably in England, but a swathe of varying accents meant that this performance could have taken place anywhere. Onlookers and listeners where treated to Joni Mitchel’s Big Yellow Taxi and Tina Turner’s Proud Mary for an energetic opening; significantly strong and passionately admired female artists.

The entire cast played to perfection- if was anything but, only they were wise to it- however it was certainly the female actors (notably, females actors also played male parts, which was achieved brilliantly) that stood out. This is certainly not to any male discredit, however.

The empowerment of women is a strong theme in this production. In a play where the female lead is dressed as a man for most of the two acts, the message is glowingly clear: that women are tenacious, fierce, emotive and sympathetic, passionate, versatile, headstrong people, who are in every way as equal as all other sexes.

Each performance was sensitive and dynamic, and successful in allowing the really important agenda of opening up a dialogue on sex, gender, race and relationships through the centuries. The performance calculates Shakespeare’s subtleties and implications throughout the original text and represents them to an audience of also calculated age and stature to both inspire and unsettle- even though, and especially because of the factors that the play is of course a comedy, and being played in an idyllic setting.

Rosalind, Shakespeare’s heroine, is considered one of his most delightful, is independent, strong-willed, pure of heart and of demonstrable wit and ability to move people politically as well as emotionally. When she is exiled, she demonstrates resource and beats off defeat with rare foresight. She uses her trip to the Forest of Ardenne as an opportunity to take control of her own fate.

Katharine Moraz is delightful as the young heroine as a woman, playing the roller coaster of first-love contradictions out to an audience who fell in love with her honesty. As Ganymede, her disguise, she is sensitive to the element of farce that the role demands, but maintains integrity to the Rosalind she is under the costume.

Interestingly about this character: only Rosalind is aware both of the foolishness of romantic love and delighted to be in love herself. From this empowering place, she teaches those around her, including her audience, to think, feel, and love better and more wisely.

Sian Martin as Jaques, Denis and William stands out for her powerful performance and sheer presence: strength radiates. Jodie Jacobs as Audrey, Adam and First Lady brings laughs a plenty and was loved by the front rows for her comedic ad libs and truly immersive performance. Comfort Fabian, who played Celia gives a heartfelt performance with all the delightful awkwardness of youth played with elegance and unique personality. Emmy Stonelake is a joy to watch as Pheobe and Amiens, playing a rousing comedic role in the former and a sweet, pure character in the latter, showing great versatility and a truly beautiful voice. Julia Righton requires no introduction; the esteemed and respected actor brought a stage presence none could rival. Sydney K. Smith deserves recognition for a sustained comedic performance; he was unrecognisable, having completely enveloped the 70s persona, which amazingly lends its self so well to Shakespeare in Sydney’s performance! Lamin Touray delivers a heartfelt performance as Silvius, desperately in love with Pheobe. Stanton Plummer delivered a graceful and dynamic performance as Oliver, Corin and Le Beau. Finally, who cannot love this romantic hero? Jack Brett is stirring and exciting as Orlando, and plays thoughtfully throughout.