Our Lady of Blundellsands - Everyman Theatre

The nuclear family is a theatre mainstay because we sit there waiting for it all to explode, and here's quite a gamut of stereotypes: brittle heroine, stoical carer/ partner, blonde airhead (sorry, brunette), budding gangster, larger than life queen (excuse the tautology). Never mind the idea that women in their 60s are old bags.... Anyway, what can you do with them? Let's find out.

Shades of Baby Jane in grotesquery and bitchiness, although poor little rich girls, Sylvie and Garne, who are in fact (and fantasy) seem devoted to each other. Mental health is brought to the fore, if not exactly clear when the former was carted off to notorious Rainhill. Pregnant teenager? Yet more sinned against than sinning; in a centrepiece scene, we learn that one of her lovers was an artist, inspired by her to create the titular stained glass window, and depicted her in all (and I do mean all) her glory, à la Courbet. Or was it when she became a one hit wonder, acting out the dream of celebrity after being in a popular TV series. Impossible to tell, although if she did dine out on this, touring supermarket openings and small town events, watching her demonstrate suggests it may be horribly true. 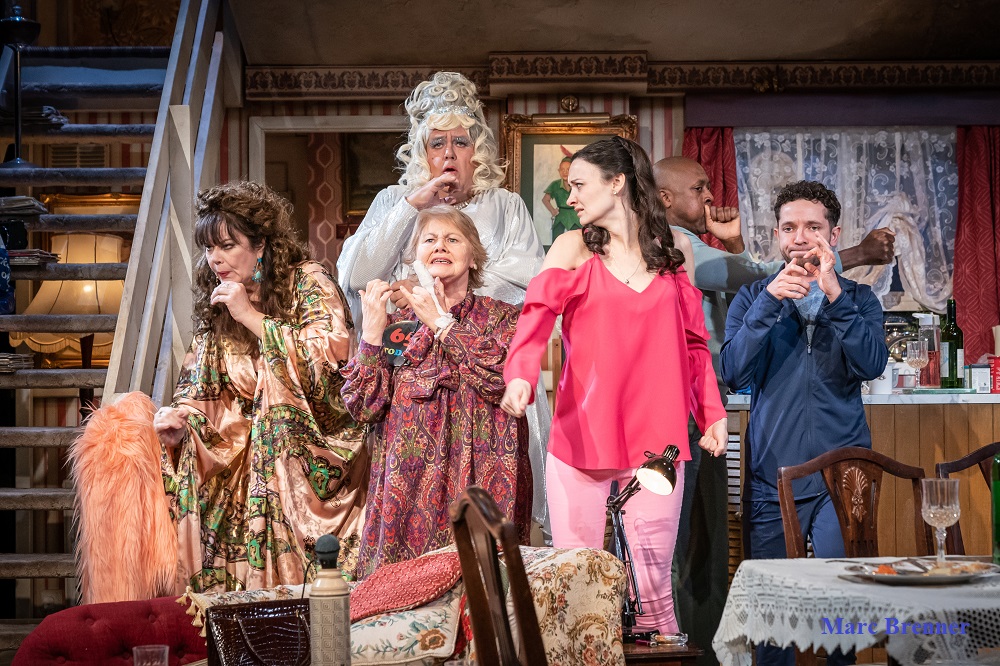 Garnet, by turn tender and sarcastically tough, and unbelievably patient, looks after her. Sylvie's sons, back for their aunt's birthday, look on, mostly in shock and awe. Mickey-Joe, famous drag star Crystal Fist, is in a very up-and-down relationship with Freddy the Foetus (the most bizarre name in the entire collection), while favourite Lee Lee is up to his neck in nefarious activities, in a rather sub sub-plot. His fiancée Alyssa provides much of the comedy, if due to her Scouse accent, rendering even the most commonplace comments hilarious. A lot of the humour comes from seemingly innocuous non sequiturs, along with grand slam bitching from Mickey-Joe and acerbic observations from Garnet and Sylvie, the latter at times breathtakingly rude.

The set is a colourful, brightly lit, overstuffed parlour the clutter perhaps reminiscent of Sylvie's state of mind; she is convinced this is her imposing childhood home and now she spends her time as a radio presenter, playing her beloved music while the rest of the family go along with it and maintain rituals to keep her happy. Josie Lawrence makes this tragi-comedy heart-breaking and heart-warming with her literally fantastic poignant portrayal of a child-woman who cannot bear to grow up and face up to all the terrible things which befell her, a nervous wreck whose anchor is her sister, Annette Badland, another tremendous performance. Then we get the two even odder couples: longsuffering Frankie (Matt Henry) and flamboyant Mickey-Joe (Tony Maudsley), who fortunately at the end seem drawn together by a baby, while Alyssa, by now pregnant, stays loyal to Lee Lee, and to his family.

So, you could say the joy and pain of pregnancy and children is the backbone of the play. Unfortunately, it sags a bit in some scenes starring the two main characters, or one of them is engaged with a supporting actor, but the rest are given next to nothing to do. Presumably they're meant to be engrossed in listening to these conversations, but there's not even any business to keep them, well, busy, rather than standing around like spare parts, about to start twiddling their thumbs.

That said, mostly an entertaining, varied evening, as light as it was dark; much of the audience were delighted to give it a standing ovation. And in many ways, a paean to Liverpool, who should make the most of it, with a theatre as amazing as the Everyman.