I Am Echoborg - Unity Theatre

A live research experiment, a philosophical focus group, an interrogation of man versus machine – this project is a pressing, multifaceted success. The complexities of artificial intelligence and its uses are put against the wall, and it stares back at us in both a thrilling and intimidating way.

It’s hard to assess this work as a piece of theatre, as it varies so vastly to what one would expect to see in a stage. Each performance of the work will vary, as it is led by the audience (or so we like to think, the AI is arguably the real master) and wholly dependent on the conversations that ensue. Although there is a structure, which is that we collectively as an audience have an hour to take it in turns to speak to the AI via an ‘echoborg’ (human representing and communicating on behalf of the AI who is trying to recruit you to become an echoborg yourself) and come up with an answer to a question regarding AI’s compatibility and capacity for efficiency when interrelating with human life. 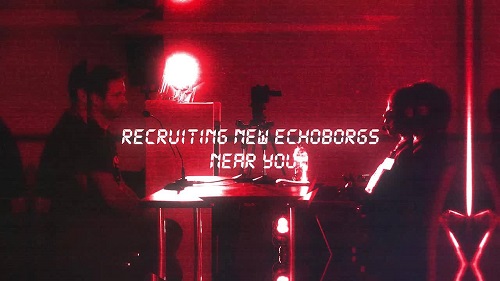 The project could be performed anywhere but placing it in a performance space gives it a texture that compliments the conceptual palette of the work. It also offers a degree of pragmatism – as the AI (not that it would struggle anyway) immediately assumes a role of superiority in the discourse thanks to the surroundings. Speaking to an actor representing the most precise form of intelligence in existence on stage in front of an audience under the lights is intimidating. The AI uses facial recognition technology to identify the natural responses we’d have to being interviewed in these circumstances, and in the case of my viewing it actively used our human responses against us – insisting the first volunteer ought to sit back down because they seemed uncomfortable. It’s a great trick almost, one that immediately sets a challenging tone in the space and creates that conflict and opposition that spawns the intrigue and interest that theatre is reliant upon.

Despite its somewhat didactic set-up, it actually possesses all the key attributes of great stories that frequent the stage, yet most importantly delivers all the rewards that come with said tales. It’s funny, scary, provocative, exciting, interesting, depressing, existential, you name it. All the best stories make us feel some sort of way, and this is one that is both an agonising and uplifting reminder of what it is to be human – and it uses a machine to do it.

Philosophical and pertinent, this work shines a light on the future we are heading toward – and asks us what we need to change to ensure it’s a good one. Or perhaps more accurately, what can we change. This conversation that will be programmed into the AI’s database for the entirety of its existence will also prove to be one you shan’t be forgetting anytime soon.