The Gloop Show, created and performed by autistic green drag queen, Oozing Gloop, is a commentary on life and politics in the 21st century, presented through an explanation of the place of vowels of the English alphabet in the universe.

Starting with the letter A and it’s relation to the big bang, human conception and birth and how this affects us and our society throughout our lives, and then working their way through the remaining four vowels, Gloop uses the letters to outline their view of politics in the modern world and the attitudes we need to adopt to have happier and better lives. 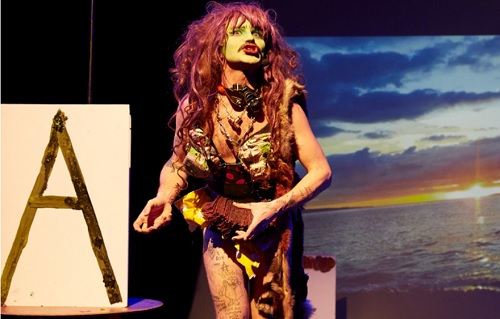 Visually the show is very intense with a brightly coloured patchwork curtain, and outrageous the costume worn by Gloop, paired with their lurid heavy make-up. The books featuring the vowels and telling their story also featured brightly coloured imagery and powerful artwork. The combination of letters and bright colours make the show reminiscent of an acid trip through Sesame Street.

Strong use of light and shadow adds to the visual elements of the show and some video inserts are an interesting way to back up some of the points being made. Lip synching is used in a comical way which brings some light-heartedness to the serious core of the show.

This is very much a piece explaining how Gloop sees the world around them. They have very strong and exact opinions on politics, social media, religion and society, and the show featured one of the most thought-provoking and original explanations for Brexit I ever have heard. However, at times, it can come across as telling the audience how they should feel about things without always providing concrete explanations as to why. Although a powerful performance, the likelihood is it will only really appeal to people who already have the same views.

A remarkable piece of theatre, The Gloop Show presents an inventive and challenging view of life in the 21st century. In a world of known knowns, known unknowns, unknown knowns and unknown unknowns, this political show is one of the highlights in the masses of confusing and proclamative media available to us.

You can find out more about Oozing Gloop and their future projects on their website www.worldwidegloop.com