Just so's you know, subtitle for this should be 'Give us a clue'... and it is usually interesting going to a play about which you know nothing, although there were rumours of headphones. Even more interesting if you're the lucky member of the audience plucked at random to be the main character – and wasn't it fortunate that he happened to be a trained actor? With this company, and this production, nothing is what it seems. No programme, and the press release doesn't even provide a cast list.

And what are we left with? Certainly something innovative – guaranteed you won't ever have experienced anything like this before. Inventive, however, is in danger of spiralling into fancy self-indulgence and/or plain irritating. Those headphones, for a start, which enable director, Bush Moukarzel, to provide a voiceover, quite literally, as he often talks over the actors, and most explanations tend to tail off whilst characters and plot details are summarily dismissed and the cast crossly criticised. Inevitably, as the play descends into chaos, so does he. No surprises there, since he first appears waving a gun, and we all know what Chekhov had to say about that. And we can all guess how it ends up being used, with, fair enough, an amusing twist, given the circumstances. 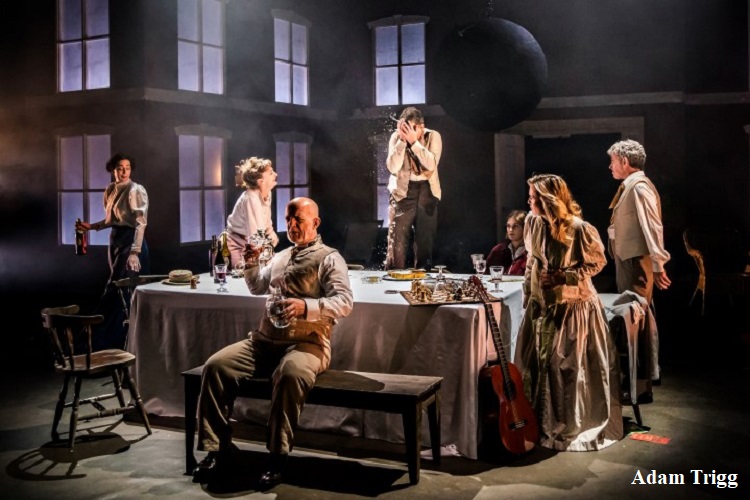 Anyway, his first play (written when he was 18, God love 'im) would have lasted 6 or 7 hours and had 40 characters.... The curtain rises on a Russian country house (remarkably English looking), in the grounds of which is set a large dining table, where the Widow is sitting, back towards us. Enter her friend, the Doctor (yes, you may well ask who...), then the Old Man, her constantly bickering stepson and his wife, and the pregnant wife of schoolmaster, Platonov. Much of the dialogue swirls around this last, who has yet to put in an appearance. It's sort of Waiting for Godot, with knobs on; perhaps indelicate at this point to mention that not only are there costume changes but two of the chaps strip down to their underpants.

So far, so good, because you are able to see that this Chekhov bloke maybe did have some quite bright ideas. Then Dublin based Dead Centre take over and we're off on a wild goose chase; past and present overlap and everything goes mad. Some things are quite fascinating; a giant wrecking ball descends, swinging alarmingly, then it's anointed and bursts into flame to represent fireworks although more like a huge Christmas pudding, and thereafter, a mirror ball. Maybe. A drill, amongst other things, is pulled out from under the tablecloth and used in a half-hearted attempt on the walls at the side of the stage; no idea why – ah, must symbolize the forthcoming revolution and descent from aristocrat to artisan?

Since it is virtually impossible to single out any member of the cast, let's just say, they all wholeheartedly entered into the spirit of the thing, no matter how bizarre the action or speech. The after show talk wasn't altogether revealing either (but interesting to hear one actress claim she'd had only a couple of days' rehearsal), although some of the director's comments and ideas were telling; you certainly couldn't fault him for enthusiasm.

Well, now: genius, or just gimmickry? Ugly Duckling or The Emperor's New Clothes? What does it all mean? That, apparently is the whole point, ie, in theatre as a whole, not just this play per se. And if you're looking completely different, this production is the place to be. https://www.everymanplayhouse.com/whats-on/chekhovs-first-play