Around the World in 80 Days - Liverpool Playhouse

That is quite some challenge... no, no, no, not navigating the world in nearly 11 and a half weeks (definitely does not have the same ring to it) but depicting all those countries. Never mind all the different people, and full credit to the triumvirate of Adaptor, Laura Eason; Director, Theresa Heskins; Designer, Lis Evans, complemented indeed by Movement Director, Beverley Norris-Edmunds.

They all ensure we're off to a good start as the curtain rises to reveal a massive staircase constructed out of steamer trunks. And what takes place in front is nobody's business. In fact, it's all kinds of business, particularly as the cast rapidly change character and costume, whirling back and forth, altering scenes, scenery and props, executed perfectly in time with the excellent soundtrack (James Atherton). It could be bewildering, but dexterously and joyously done, it's bewitching. 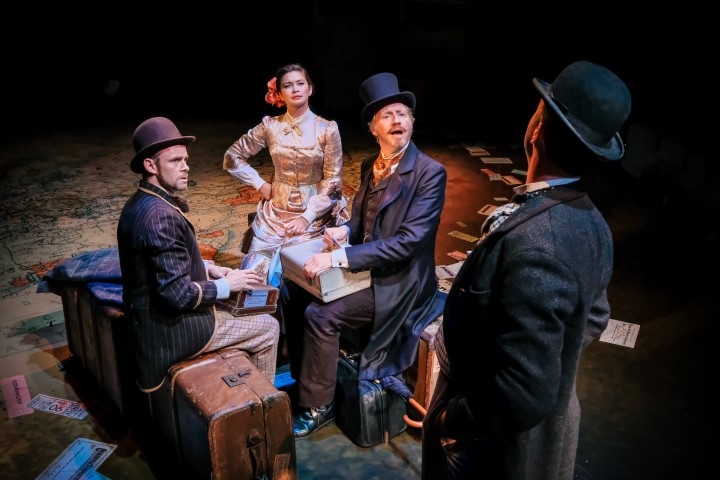 And yes, mime fans, travel is by rail and boat, you get the usual bouncing up and down and swaying side to side, but, like Phineas Fogg himself, goes much, much further. Borrowing an elephant, as you do, is fabulously conveyed, and although fight scenes can be clunky, that awkwardness is transformed into something amazing, all done in slow motion. I've rarely seen a play where so many scenes were so often applauded.

Or the characters, and here, it's Michael Hugo as Passepartout, the epitome of physical theatre, grimaces and gestures, never mind improvisation, who is cheered on as much as his boss in his seemingly hopeless quest. Hugo also veers into pantomime, wickedly making the most of audience participation (hope Vivien has recovered at the sudden request to do sums; to which, fair play, her immediate answer was 'lots'). Similarly, Dennis Herdman as Inspector Fix received acclaim, most of it booing, as the dastardly yet comical villain of the piece, determined to get his man, convinced Fogg's funds are the result of a bank robbery.

By contrast, he is the perfect Victorian gentleman; something of a dry old stick, with Andrew Pollard firmily hanging on to the stiff upper lip. In fact, the opening does not bode well, à la Groundhog Day but even more boring as he pursues his daily routine. He does of course eventually soften up because of the love of his life, Mrs Auoda (Kirsten Foster), as charming a heroine as she is determined. And Joey Parsad is just as heroic in all her many roles, particularly as a con merchant, whether it be boats or beasts. Another champion of physical theatre is Nyron Levy; Captain Speedy amongst others, while both Pushpinder Chani (Mr Naidu) and Matthew Canley (Colonel Proctor) convincingly rattle through a variety of roles.

It's certainly equal opportunities galore as the action gallops along, from London to Suez, one of the funniest scenes being set in Egypt, via India, pausing briefly to rescue Mrs Auoda, then on to China from whence it's over to the Wild West, evading cowboys and buffaloes, and up to NYC for the final leg of the journey, arriving, yes, in Liverpool, ready to head for London, where they arrive – too late. Or do they?

Now comes the hard bit, because I don't wish to give the game away and spoil your viewing pleasure. Oh all right, then, just the one, where an overcoat doubles up as the elephant's head, sleeve as trunk.

A production which is garnished and garlanded with such inventive ideas, as mentioned, each example was rapturously received. You really must see for yourself. Such a deliciously ridiculous play makes for a thoroughly entertaining and enjoyable evening – make sure you don't miss the boat. https://www.everymanplayhouse.com/whats-on/around-the-world-in-80-days