The Barn Swallows is the first full length play from Liverpool based production company Make it Write. Written by local playwright Helen Jones and directed by Meg McFarlane of Jack of All Trades Theatre, it explores themes of mental health and gender roles against the backdrop of the Wild West in 1875, a decade after the end of the American Civil War.

Opening on a straw strewn stage with Danni (Reyna Gaia) tied to a chair by her sister Rachel (Kate Lavery) for the crime of killing her parents – her mother having died in childbirth and her father drinking himself to death as a result – it quickly becomes clear that the role of women is an important issue in this play.

Barn swallows are a bird that find the safety to breed in barns, so by opening the play with the scenes of painful torture in a barn, the title has been cleverly exploited to good effect by exposing the darker side of what can happen behind closed doors. 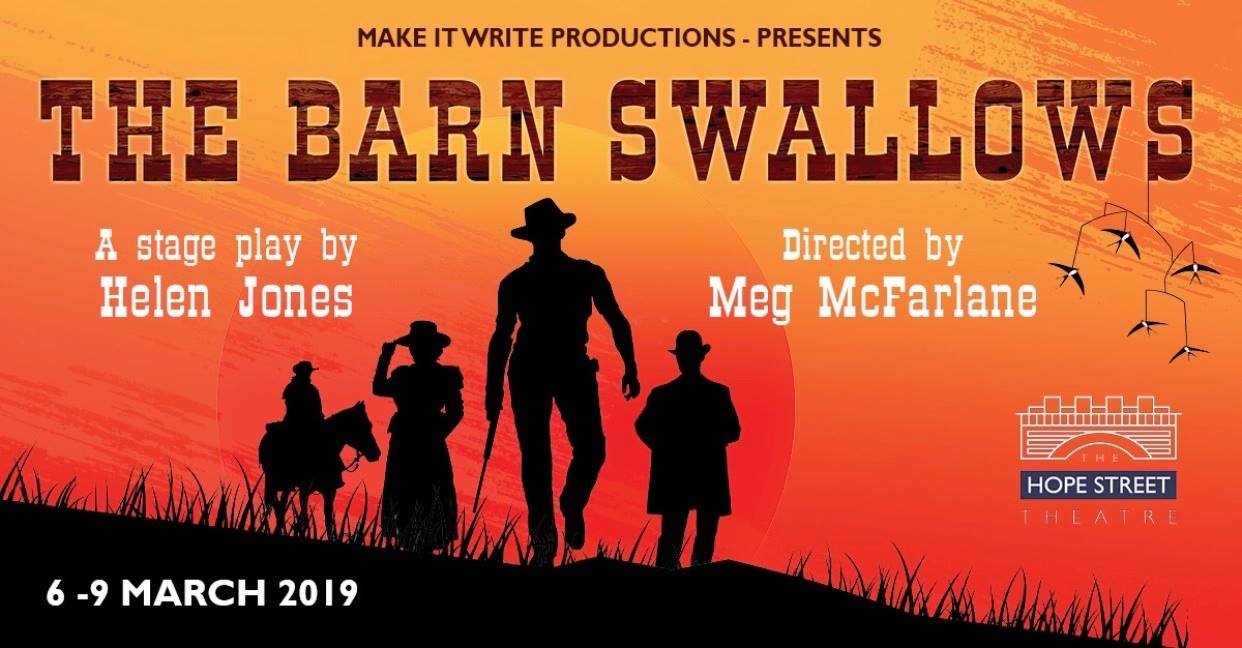 This prologue is followed by an introductory narrative being projected onto the back wall of the theatre which sets the scene by introducing the audience to Fort Griffin where the play is set.

Danni then stomps back onto the set, a bounty hunter in the guise of a man, and delivers her latest kill to Sheriff Cornell (Pete Gibson). Much to her horror the Sheriff finds the coffin empty. She angrily accuses him of stealing the body himself before declaring she will find it and collect her bounty.

It seems that the answer to finding the missing corpse may lie with the charming and intelligent stranger Robert Frost (Al Donohoe) who wanders into a saloon owned by Alice (Geraldine Moloney Judge) looking for somewhere to stay after a particularly rough night on the whiskey.

He impresses Danni with his detective skills, before embarking on a cautious friendship with her as they begin their search. But in a world where the law remains unbroken only when it suits and trust is never fully developed, it quickly becomes clear that before this story ends there will be more than one body to fill the empty coffin.

The set of the play is simple but effective. Crates and empty bottles create a sense of the Wild West, without distracting from the action. The coffin is ever present on the stage, never allowing the death and decay which haunt these lawless streets to stray far from the audience’s minds. The coffin lid cleverly doubles as the bar in Alice’s saloon, serving as a reminder that saloons in this genre are often a place haunted by death.

Mental health is currently a major theme in theatres and utilising the Western genre to explore these issues in an original and interesting thing to do. Each of the characters in the play are suffering from the effects of the Civil War in some way and all of them are reluctant to discuss their feelings. This attitude would have been particularly relevant during the period, and remains so now, there being an expectation for people to get on with their lives without allowing the past to affect them.

The original soundtrack by Reed Anderson is an interesting addition and gives the play the authentic feeling of an Old West film. The memorable music was cleverly utilised to bridge scene changes and kept the mood of the piece alive during lights down.

The vulnerability of women and expectations upon men were explored in detail. Danni’s decision to live as a man and the level of protection this afforded her contrasted well with Gaia’s over the top posturing gestures in a clever exploration of gender norms and their effect upon individuals.

The play was well performed, and the essential southern American accents were maintained well by the entire cast throughout the show. There were some places where the pace dropped to such an extent that the suspense and mystery was lost a little, but the actors invariably managed to pick this back up.

The chemistry between Gaia and Donohoe was good and created a sense of tension during the play. Moloney Judge and Gibson’s performances were excellent, and the experience of these actors shone through.

The Barn Swallows is an admirable demonstration of local theatre and will undoubtedly not be the last we see of Helen Jones’ work.

Make it Write are a local production company supporting new writers in the Liverpool area. Forthcoming performances include Write Up Your Street, Death and All His Friends and Monstrous Minds. Further information can be found on their website http://makeitwrite.org.uk/