The Nether, by Jennifer Haley, is a disturbing and brutal tale of the world we live in, on and offline. Presented by Falling Doors Theatre, and directed by Sarah Van Parys, assisted by Ben Rivers, the play explores the darkest corners of the human mind and makes you question everything you know about the world.

Monotonous piano chords and billowing smoke set the atmosphere from the beginning. Stark white pods on the stage illustrated the futuristic nature of this story.

The Nether is a fully immersive virtual reality in which people create realms. These realms can be any time and any place and provide fully sensory experiences for users.

One of these realms, “the Hideaway” has been created by Mr Sims (Lee Burnitt). It is a Victorian house in which Mr Sims, called “Papa” within the realm, has a little girl, Iris (Kimberley Athawes). The Hideaway is a paedophilic fantasy world in which Mr Sims and various other visitors have a sexually and physically abusive relationship with Iris. Detective Morris (Catherine Devine) has discovered this secret world and had it investigated by Mr Woodnut (Grant Ryan Lenton). The play unfolds as Detective Morris interrogates Mr Sims and one of his customers, Mr Doyle (Andrew AB), about the realm. 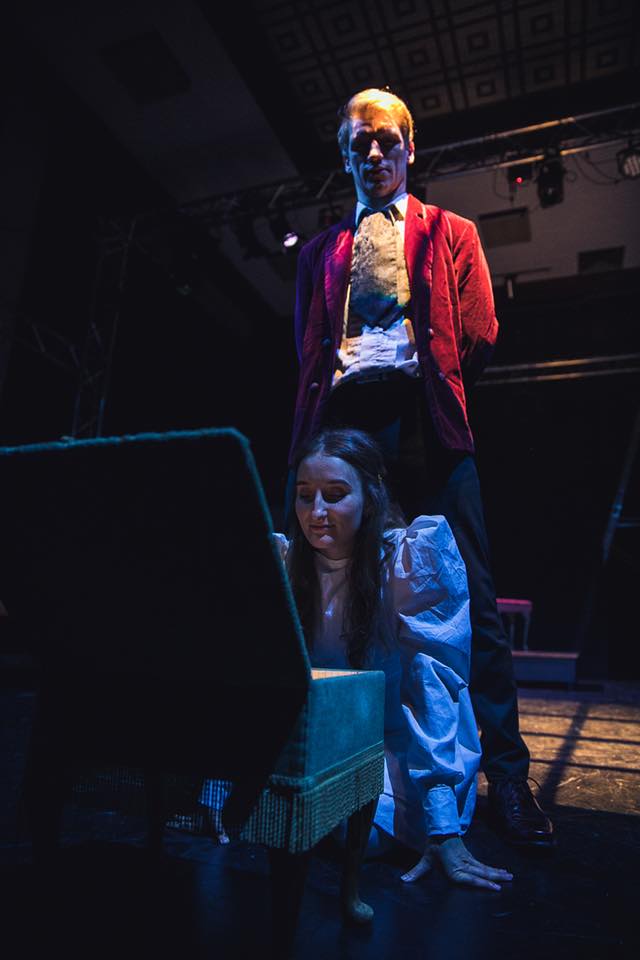 The action was presented on a thrust stage, which allowed the audience to be immersed in the story in the same way that the characters were immersed in the Nether. However this formation inevitably means that actors often have their backs to some parts of the audience and they should bear in mind for future performances that this can have an effect on how well their lines can be heard.

The Victorian fantasy was projected onto a screen in full colour which contrasted with the stark white pods of the real world. The visual would periodically cut out and shudder, showing that this nostalgic vision was a creation and not a reality. Period furniture littered the stage and period costume within the Nether contrasted with modern clothing in the real world.

The theme of control was explored in great detail. Mr Sims’ manipulative control over Iris and the users visiting his realm was contrasted with the police rescinding logins from people who had violated the rules. This reflected online grooming and removal of social media accounts in today’s world, showing how close we actually may be to such a reality. Some characters spoke of permanently living in the Nether rather than in reality which seemed like a terrifyingly real possibility.

The lighting in the play created a cold, clinical atmosphere. Shadows of characters backstage, leering over the silhouetted characters onstage created an eerie reminder that when you are offline that world is still there. The transitions between the real world and the Nether were cleverly presented using sound effects and lighting which gave clarity to the story, while still allowing the lines between the two worlds to be blurred.

Devine’s robotic performance as Detective Morris was brutally honest. It could quite easily have come across as unemotional, but instead showed a woman who dared not feel, rather than could not feel. Andrew AB as Mr Doyle came across as absolutely destroyed by his overwhelming emotions in a viciously raw performance.

As the story becomes ever darker and twists and turns into Mr Sims’ nightmarish world spin out of control, it becomes clear that nothing in either world is what it seems. Dragged into his obsession, the characters begin to question how much control any of them have and the lines between what is real and what is not fade out completely.

The Nether is a world where you can be anything and anyone you want to be, but if all you want is to be safe and loved, it might be time to log out.

The Nether is showing at the Hope Street Theatre until 29th September. Tickets are available here https://goo.gl/V7rz1Z