STOP! The Play by David Spicer, is a play about a play being rehearsed by a group of actors on the edge of a full blown meltdown. And the crew have dropped straight off the edge.

Peridot Productions’ performance, directed by Michael Wolf and Matthew Khan, fully exploits all kinds of ridiculousness, creating a show that is far more realistic that most people involved in theatre would probably care to admit.

Opening with actors warming up on the stage, scripts in hand and running through vocal warming enunciation exercises, the comedy begins gently, amusing for both seasoned actors who know the importance, but awkwardness of these routines, as well as outsiders. However the comedy becomes a little awkward as the demanding actor Hugh (Nicolai Suphammer) disappears into a neurotic diva breakdown. This is quickly broken by Chrissie (Ane Skarvoy), the Stage Manager, putting the set together so that rehearsals of the world’s worst play can begin.

The show is a farce, and one which makes fun of actors and theatre crews alike. There are many deliberate mistakes so it was hard to tell if Skarvoy’s overly exaggerated American accent was deliberate. Unfortunately some of her dialogue was inaudible due to the caricatured stretching of syllables. The accent also dropped at various points during the performance, making it difficult to tell whether or not this was intentional. 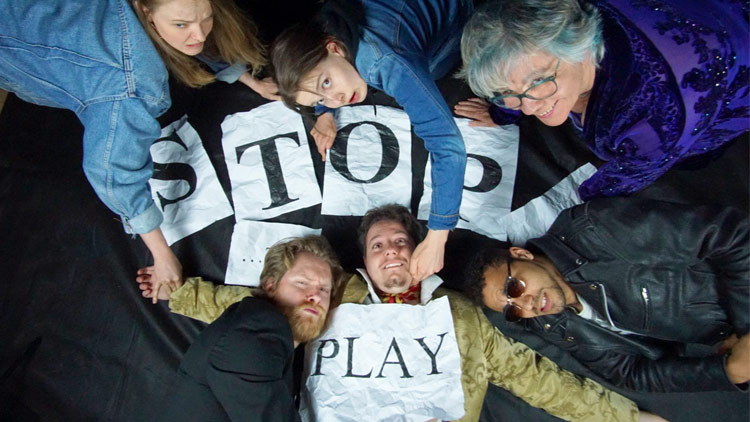 Throughout the play Skarvoy and Michael Wolf as the Director, Evelyn, read out flowery stage directions to a pseudo Brechtian effect. The actors would respond to these enthusiastically and literally creating laugh out loud situations and some ingenious physical theatre. The cartoonish facial expressions of Katie Hargreaves as Gemma, a young and enthusiastic but naïve actress, particularly stood out.

Criticism and tantrums were the key comedic element in the play, with much hatred being hurled towards the faceless writer who continuously provided new scripts which, as he might have written, lay strewn across the stage like abandoned confetti on a rainy wedding day in mid-April.

In addition to constant rewrites, the late addition of Kriston (Kai Jolley) a new cast member playing a black American rapper for no apparent reason, created further tantrums from Hugh who felt it was his right to have the leading role.

Exploitation of stereotypes and inappropriate flirting made the play particularly relevant and darkly comic for today’s world. Mispronounced words, inappropriate stage blocking and a monkey on the loose added further layers of farce. Corpsing and breaking the fourth wall for effect created some hilarious situations.

The use of overlapping dialogue meant that at times parts of the play were a little difficult to follow, but overall it created a naturalistic and realistic tone, which accurately portrayed the rehearsal room.

As opening night approaches and no-one knows what they’re doing or who they’re playing, panic really starts to set in. The actors hate the play, each other and the Director, and the Stage Manager is one lost prop away from losing the plot entirely.

The second half of the show presents the play which has been so pointlessly rehearsed. As the Stage Manager and Director themselves become props, pretention is fully exposed and laughed at loudly.

If nothing else, the question that has plagued many Directors will be answered. How exactly do you remove a corpse from the stage without having an actor just get up and walk away?

STOP! The Play is showing at the Hope Street Theatre until 22nd September. Tickets are available here https://goo.gl/jXQEXs