The stunning Walled Garden in Reynolds Park, Woolton provided the bucolic setting for Shakespeare's tale of politicking and betrayal, with Mark Davoren and the Liverpool Network Theatre Group delivering a youthful and vibrant performance to juxtapose against the tranquil background.

Julius Caesar is undergoing a performance renaissance at the moment and it is easy to see why. An autocrat acclaimed by the people and despised by the educated elite is murdered and civil war and strife follow, it doesn't take a huge leap to imagine transposing these events to the modern United States or even post Brexit Britain. Despite depicting events occurring over two millennia ago, the motives of ambition, loyalty, honour and jealousy are as relevant today as when first explored by Shakespeare over 400 years ago. 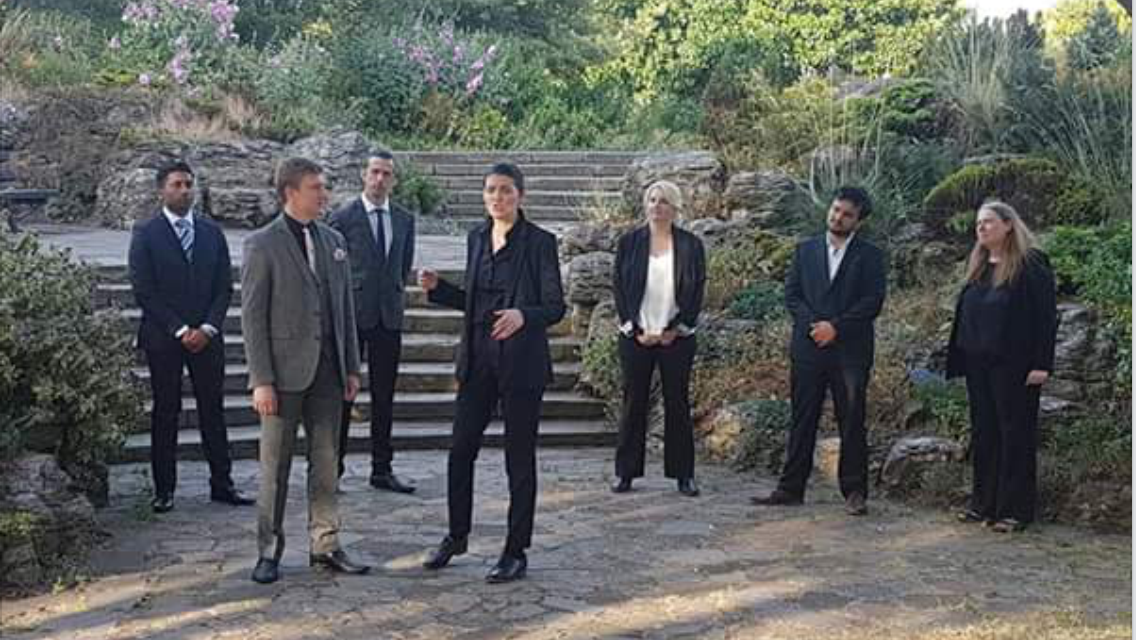 Unlike most Shakespeare tragedy, the driving character in this play is not the eponymous hero. Caesar is played here by Oliver Barden, highlighting the characters superstition and lack of conviction that leads to his downfall well, however the performance lacked the requisite balancing charisma that would indicate a leader of such abilities. However, the strength of the piece rests within the character of the two main plotters Cassius (Cameron Steen) and Brutus (Saoirse Crean) as well as Mark Anthony (Greg Vicary), Caesars loyal lieutenant.

The decision by the LNTG to place these crucial roles in the hands of three young actors and make the performance gender neutral, has been entirely vindicated, with a nuanced portrayal which drew the audience into the language easily whenever any/all were present on stage. Steen indeed had a 'lean and hungry look' as Cassius and clearly relished the part of the chief conspirator, I would have liked to see more obvious change in character when he soliloquises to the audience, but I appreciate that outdoor theatre sometimes requires a more ostentatious form of acting. Crean played honourable Brutus with a slow fuse, building the performance from a reluctant participant to full blooded rebel with grace and bringing the conflict inherent in the character to the fore with subtlety. The performance of Vicary as Mark Anthony was outstanding, revealing an emotional power, particularly following the death of Caesar, and an artful rhetorical style which made the familiar 'countryman' speech sound fresh and astute. I was surprised to learn that none of these three are formally trained and I strongly commend their commitment and performance and look forward to future roles.

Support was provided by a cast of over 20 actors, particularly noteworthy were Faye Christensen (Calpurnia/Octavius) and Alex Webber-Date (Decius Brutus/Messala) both playing dual roles, and both clearly at ease with the language and clarity required in delivering Elizabethan prose.

The natural beauty of the garden provided the backdrop throughout with minimal props and sound effects pushing the focus entirely on the text and performance. Director Sean Gaffney was efficient, though could have judiciously cut some of the scenes from the first half and perhaps made the funeral oration the opening after the interval, giving it more impact and the overall piece more balance.

LNTG will be touring this production throughout some of the most beautiful indoor and outdoor venues over the summer, and it with the sun shining it was a perfect English Summer treat. The remaining dates this summer are