This show had been recommended to me last year by a trusted source, so when the opportunity arose to review it, I jumped at the chance.

Many years ago I watched a performance of The Vagina Monologues, I went along having read the book and knowing exactly what to expect., However, I had no expectations at all of this show.

The show opened with the arrival of Laura Bridgeman, the writer of the show, Clare Edwards, BSL Interpreter and five Readers; all seven were gloriously suited and booted setting the scene for the show.

Laura prologue, summarised how she had conceived and developed the idea of the performance, gathering interviews from butches, masculine women and transmen across the county and around the world. Taking the stories from these interviews and collaborating with Vital Xposure, Hotpencil Press and The Drakes to transfer it the stage. The performance was followed by a Q&A with Laura.

Fifty three stories were told from the hundred gathered by Laura. 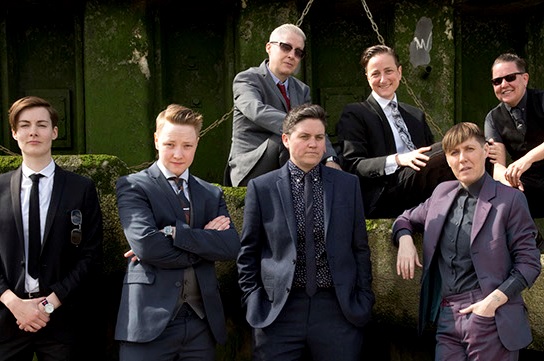 The stories were read in similarly themed groups, early childhood, teenaged angst, sex and relationships, interspersed by a group wordplay. The stories emphasised the comparative and contrasting experiences of the people behind the stories, bringing them to life. We were taken on a rollercoaster from heart-wrenching to hilarious; unrequited love to getting down and dirty; vulnerability and power; having the love and support of a family to bleak loneliness.

I felt that an important part of the stories pivoted around identity, what that means for different people and the counter play of what this also means in the context of that person’s community and wider world. The collection also addresses the concept that identity is a fluid process that slides as the person themselves change. Defining yourself isn’t a once in a lifetime thing.

The five Readers are from a group of ten, who collectively are known as The Drakes, a group of butches, transmen and gender rebels based in London. They added life to the written stories, owning them, adding the poetry and the power; the grit and the vulnerability and the occasionally comic interplay between them as a group. My only slight observation would be that a couple of the more painful stories may benefit from a slightly longer pause before the next story, to allow the audience to process the gravity of the experience before getting back onto the roller coaster.

The recently refurbished Unity Theatre, and black box style of the performance space was perfect for this show, adding to the intimacy and intensifying the power of the stories.

A special mention to Clare Edwards as BSL Interpreter, who energetically and enthusiastically interpreted the stories.

At one hour long this show is crammed with so much, it’s ‘must see’ and not just for a LGBTQI audience. Cisgender audience members would relate the powerful life-affirming and liberating messages, as well as being thoroughly entertaining.

One thing for sure I certainly won’t be able to look at a certain Swedish furniture store without thinking of The Butch Monologues!

The Butch Monologues is currently touring. Details of which can be found: www.vitalxposure.co.uk