To mark the 30th anniversary of the New Adventures Company Matthew Bourne brings us Early Adventures. The show is a collection of pieces first performed in 1989 and 1991 entitled Watch With Mother, Town and Country and The Infernal Galop.

The first two pieces are set in a Britain of yesteryear evoked in the costumes and the simple set design by Lez Brotherston.

‘Watch With Mother - Seen But Not Heard?’ is set in a school hall and playground. The piece opens with the voice of Joyce Grenfell from her famous ‘Nursery School’ sketches. We then see the dancers as children playing games, interacting with each other and the audience; apart from one boy who isn’t treated fairly and reminds us the children can be cruel. This piece hasn’t been performed in 25 years but it has a timeless quality to it that was really fun to watch.

The dancers: João Carolino, Reece Causton, Tom Clark, Daniel Collins, Paris Fitzpatrick, Sophia Hurdley, Mari Kamata, Jamie Emma McDonald and Edwin Ray; each have a unique look and character but together they have created a synergy of movement that was, at times, simply breathtaking and deeply moving. 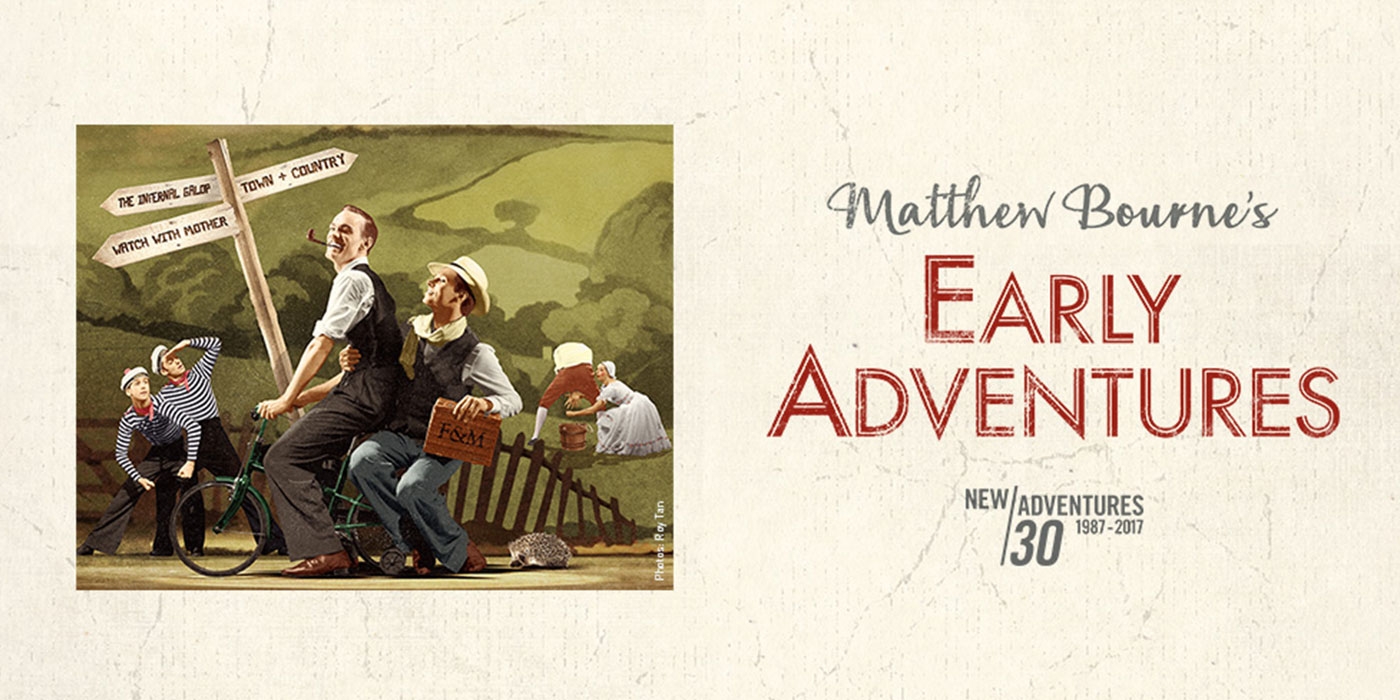 Matthew’s company is well known for its wit and character-led performances which deliberately break down the ‘third wall’ and ask for interaction from an audience. This was particularly evident in the second piece.

‘Town and Country - Lie back and think of England…” In ‘Town’ we are exposed to an era between the world wars, a time of abandoned fun, of brightness and gaiety but still very restrained by class, social order and the classic British ‘stiff upper lip’.

My favourite scenes were the bath time because of its sheer joy and the reworked Brief Encounter, from the 1945 film. Every scene was danced with such warmth and fluidity of movement, it was a real feast for the eyes and the heart.

After the interval, the backdrop has been washed with colour, like a Frank Henry Mason railway poster from the 1930s, for ‘Country’. In this piece, the dancers continue their well-observed character work, in addition to creating animals and moods. The sense of fun increased in these acts and even the woodland creatures came along to watch, with disastrous effects!

The final piece ‘The Infernal Salop - A French Dance with English Subtitles’ is set in Paris. In this piece, the place and time are painted by the costume, the set and the music of Edit Piaf and Charles Trenet, and other familiar French classics. In all the piece music is perfectly chosen, edited and utilised to become another voice to tell the narrative.

I was quite simply blown away by tonight’s performances, it was perfectly sublime. As a fan of Matthew Bourne’s work, it was interesting to see glimmers of his future work and beginnings of a style of choreography that literally transformed the face of dance in this country.

If you have enjoyed Matthew’s production before then you should come and see this show and see where it all began.

If you haven’t seen any of Matthew creations the you should come and find out what all the fuss is about!

Early Adventure continues at the Liverpool Playhouse until Saturday. http://bit.ly/2myUxEH