So is it a Play? a Film? Answer, both of these!...... but this time add a musical written by Gary Barlow and Tim Firth. What is extraordinary about the story is it is based on a real life event which actually happened with phenomenal success way back in 1998 when a group of ladies, all members of the Women's Institute (W.I.) in rural Yorkshire wanted to raise money for charity.

Realising that the stereotypical things the W.I. were renowned for, Victoria sponge cakes, plum jam, flower arranging and knitted items were not going to raise the monies they want in memory of the recently passed away husband of one of their members and for The Leukaemia Research Fund (now known as Bloodwise, the much discussed topic of a calendar arises once again. This is something that had been put on the back burner as it had been suggested that instead of conventional views of green fields, rivers and bridges it would feature the ladies of the institute in the nude! 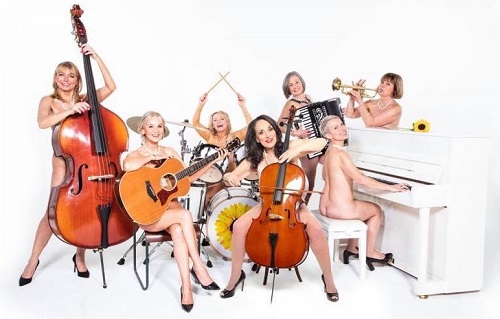 Unsurprisingly, with an age range of 50 plus the idea was not greeted with enthusiasm, but wanting to show support for their friend the ladies one by one were recruited and the calendar was created, resulting in a media frenzy and changed the image of the W.I. ladies forever and to date raising nearly £5 million for Bloodwise.

To a packed house of a predominantly female audience, the cast are amazing at expressing emotions through song whether comedic with Lisa Maxwell (TV's Loose Women) as air hostess Celia and 'I've had a Little Work Done', the heart-breaking 'Kilimanjaro' from Sarah Jane Buckley (Hollyoaks) as Annie and the solidarity of the locals and all the cast with 'Sunflowers of Yorkshire'. Julia Hills (2 point 4 children) as tragic housewife Ruth again brings laughter with 'My Russian Friend And I'. The musical introduces others to the cast in the form of teenage children of the ladies, with Jenny and her flirtatious affair with Danny performed by Isabel Caswell and Danny Howker respectively, who highlight the awkward and embarrassing moments encountered by teens realistically and friend Tommo played by Tyler Dobbs, who again adds humour to the show. Rebecca Storm, an established leading lady of multiple musical theatre shows performs wonderfully as Chris, her enthusiasm for the calendar infectious but her friendship and support for Annie truly seems real on stage.

With Sue Devaney (Cora), Judy Holt (Marie), Ruth Madoc (Jessie), Claudia Bradley (Miss Wilson) and Pauline Daniels (Lady Cravenshire/Brenda) completing the female cast it should not be underestimated how challenging their roles are and with not an airbrush or Photoshop in sight how much courage it must take to perform in front of a vast audience when you are about to reveal all! Thankfully strategically placed buns, teapots and knitting are on hand to preserve their modesty and it all very tastefully executed but with great hilarity and at each removal of a dressing gown there are rousing cheers of support from the audience.

Although there is much laughter in the show it is not without its tragic moments as to the reason for raising money and the death of John (Phil Corbett) is movingly and respectfully handled.

The Green Hills of Yorkshire were depicted in a realistic looking backdrop with the addition of a solitary branch making appearances as the seasons changed with other props swiftly recreating the WI Hall designed by Robert Jones. The songs were poignant, funny and relevant but sadly not as memorable as I expected. Calendar Girls received a loud and appreciative standing ovation, its content touching on cancer and grief, family issues, rebellious kids and friendship all relatable and certainly brought tears to the eyes both in sorrow and joy.

The show continues at the Winter Gardens Opera house until 19th October 2019 and for tickets and more information https://www.wintergardensblackpool.co.uk/whats-on/calendar-girls-the-musical