Lancastrians is a brand new play stopping off tonight in Preston as part of its tour of Lancashire throughout April and May. Performances are in community venues aswell as traditional theatres which illustrate its essence. The theatre company is run by brother sister duo Liz and Nick Stevenson.

Uniquely compiled from genuine conversations with 500 people interviewed across Lancashire over a year. Actors will depict them in ‘their very own words.’ So it’s guaranteed a ‘no holds barred, salt of the earth type show or at least you hope.

The set design is striking (by Louie Whitemore) it’s amazing how much time and creativity must have gone into it, transforming the community centre into a disco boxing ring with seats. Uplifting music pumps out and local caterers the Larder are on site with nibbles. Polaroid’s grace the set depicting places in the county that have caught people’s eyes. 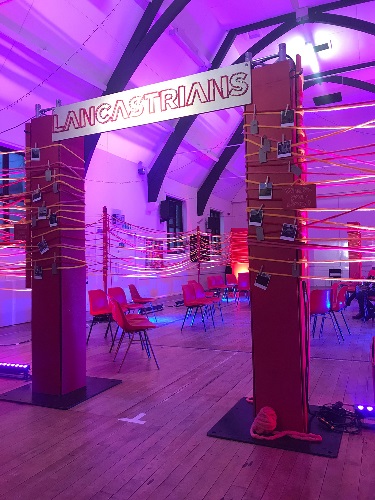 There’s pens for you to record your thoughts on what Lancashire means to you, it really is very immersive, especially when you realise you are required to sit on the stage area with the cast. It’s wonderfully different in an experimental way.

Lancastrians is performed by three actors, Matthew Durkan, Roberta Kerr and Natasha Patel. Dressed in simple grey attire, they take on a dizzying amount of Lancashire characters, reciting verbatim, the words those interviewed actually spoke. Wool is one of the prevailing themes, so much so it’s central to the set design. This is because of the enigmatic Mrs Johnson of the Wool Emporium. As the actors wind the brightly coloured wool, Roberta Kerr takes on the role of Mrs Johnson with brilliant aplomb. Putting the world to right through her fabulous knitting crew seems to be the name of the game and it’s fantastic. For knitters are such a ‘nice,’ bunch she tells us. Invite Theresa May to one of their natter sessions; they’ll soon sort her woes.

Of course this has the audience in hysterics, her mannerisms and accent are so endearing, and although laughing it’s not in a cruel way.

There are many other very funny characters, Matthew Durkan takes on the chairman of the Lancashire Society, and his facial expressions bringing them to life spectacularly. Sometimes you were thinking no way did they really say that. Mrs Johnson’s cleavage enhancing cardi is a wonderful moment.

Despite all the laughs, there is a tragic-comic side to the production. Strong proud Lancastrians often remind us of social deprivation and poverty that is underlying some towns such as Blackpool. Dreams of leaving Skem (Skelmersdale) that may never happen. You’ll have to leave to get to Hollywood.

Sometimes you felt you’d met some of the characters or knew them already so familiar were there conversations, especially if you are from Lancashire yourself.

Natasha Patel and Matthew Durkan are great as the old folk of Lancaster who are fed-up of the students. They want an old time music hall night and it made you think why more of this thing isn’t available for people. Lancastrians was good hotpot entertainment tackling some important issues at the same time. https://www.junction8theatre.co.uk/