Now I know this is a classic childrens story by Edith Nesbit and a successful film but I have to admit to having no idea what it is all about as I have neither read the book nor seen the film, so it was with an open mind I went to see this musical adaptation by Stephen Kingsbury and Ben Sleep this evening.

Presented by Talking Scarlet a touring theatre company based in Brighton, the story is set in 1905 and focuses on a mother (Polly Smith) and her three children Bobbie, Peter and Phyllis who have to move from their comfortable London home to the country after their father is arrested and jailed as a spy although the children are unaware of this fact.

The stage is set very basic, and other than a few props added and removed does not change for the duration. There are images of the countryside, the cottage and the railway station plus several other scenes which are projected at the back of the stage at the beginning of a new scene, occasionally a little late and then with the lighting on stage almost disappear so become ineffective. 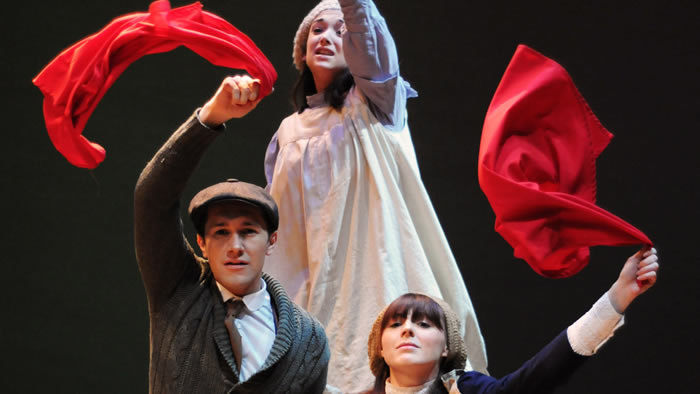 The three children Bobbie (Sophie Holt), Peter (Simon Turner) and Phyllis (Carly Day) are portrayed by adult actors which I found disconcerting and a little disappointing. It was difficult to accept their characters and I think with a title of 'Railway Children' then child actors should have been used and would enhance the musical greatly particularly for younger audience members giving them someone to relate to.

As the 'children' explore their new surroundings they are delighted to discover a railway and station and become friends with stationmaster Mr Perks, played by Harry Hart, who is possibly the saving grace for this musical and if he had just slowed down a little with his songs I might have been able to follow what he was singing! To be honest there were so many times through the evening that I couldn't follow what was being sung as for some reason they were performed so fast or had several performers singing different things at the same time it became confusing. For a musical there are no standout singers which again is a disappointment.

Befriending a Russian Exile Mr Szczepansky who is ill and searching for family, the children take him back home to be nursed and that's the last we see of him! Even when news reaches that his family has been found Phyllis excitedly shouts "I'll go and tell him" then rushes upstairs and seconds later returns declaring "I told him" it just seems a pointless moment.

Characters come and go, from villagers to an old gentleman the children wave at everyday as he passes by on the train, who turns out to be the grandfather of Jim, someone the children discover with a broken leg in a tunnel and again take him home to nurse! The childrens mother appears to travel on the train too....if you are going to double up as a passenger then it would be advisable to try and change appearance at least! The reunion of father and children should be memorable but it lacks emotion.

Considering the book and film were aimed at children I do not think this particular musical adaption would hold the attention for young children for long, I myself struggled to keep interest.

Strangely there are no flyers, brochures or information regarding this show available and I am grateful to the Grand Theatre ushers for obtaining the cast list for me from backstage.