Delving into the mystery and excitement of the city’s underground cult venue Antwerp Mansion was always going to peak my intrigue and last night at Barred for Greater Manchester Fringe I’m so glad it did!

The recently rebranded arts venue is the perfect spot for some deftly delivered immersive theatre, you’re greeted on entry by two bartenders Immy and Cal. They serve you (free!) drinks, chat like any bartender would and you take a seat. Other punters pile in, we’re all chatting and the music is playing until it softens and lights go up on the grungy bar. 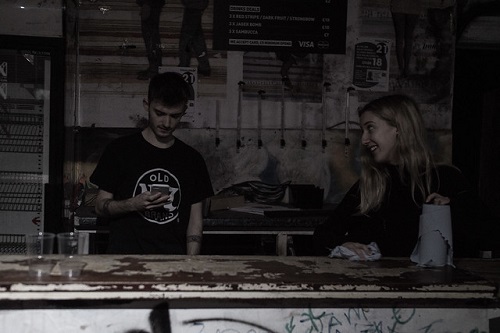 Immy and Cal begin to tell tales of their nights on different bars across different cities, as Immy’s first shift in this one shows itself to not quite be what she’s used to in more upmarket restaurants she’s worked in before. Cal has seen everything, drinks on shift and has his own stories about being less than responsible, never mind the customers!

The pair share true stories of embarrassing customers they’ve served, some gross and some almost unbelievable until you realise you’ve seen it happen yourself on nights out across town. That was my favourite thing about the show, is that it transported the audience back into their own experiences of great nights out and scenes that have unfolded in their own lives. The whole audience was laughing and cringing along with them, the relaxed nature of the show encouraging us to engage and sing along.

There is definite light and shade in Libby Williamson’s script despite the chilled out vibes of the venue and lack of fourth wall. The pair cover sexual harassment, power structures, drug abuse and more in their conversational performance. They also dance on the bar, sing into broom handles and use shot glasses as eye glasses! The scripting is well balanced and fun, remaining consistently tangible for the audience.

Barred is a great show, on until the 20th July as part of GM Fringe depicting the truths and silliness that goes on behind the scenes of your favourite local drinking haunt. It’s well worth a visit if you’ve spent any time behind bars, and even more so if you haven’t – it will certainly enlighten you to a bartenders life! https://manchesterfringe.eventotron.com/?event=37504