The Suitcase, The Beggar and the Wind - Stockport Railway Station

I love the unusual setting: a bare brick room at Stockport station between two platforms, with trains coming and going constantly. I love travel, I love the romance of travel and I love trains, so this offered a lot of potential. Despite freak weather earlier in the afternoon, the show was sold out.

There are five characters, all dressed in clothes that slightly suggest times gone by and also vaguely hint at a foreign setting. (It’s France.) ‘The Beggar’ plays an acoustic guitar and sings in a slurred, almost drunken, guttural voice. A male passer-by walks past repeatedly, carrying different objects, saying “I’m just passing through.” A couple, Irene and Etienne, arrive. The suitcase Etienne is carrying is heavy and he is complaining, which upsets Irene.

“Is this any place to ask me?” counters Etienne. “Right here, between the suitcase, the beggar and the wind?” 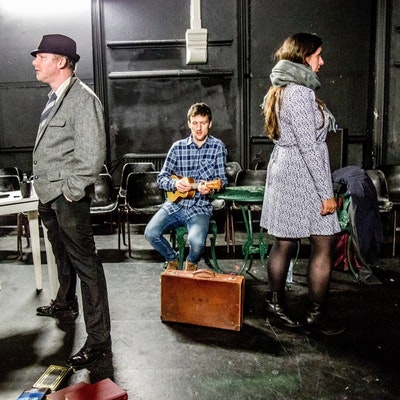 The dialogue and delivery are not naturalistic, but lyrical, theatrical, almost Shakespearean. There is a sense of oddness; the characters and their language seem strangely displaced and unreal, presumably intentionally so.

The male passer-by comes along again, this time carrying a clock, and Irene embarks on a long and ludicrously fantastical conversation in which they appear to go from strangers to lovers, saying things like “We will dive into the pond of pleasure and marinate in it.” But then the last train is announced, so Irene abruptly drops his hands and she and Etienne leave, without so much as a goodbye. The passer-by rather sadly goes on his way with his clock.

At this point, six people from the row in front of me walked out and didn’t come back.

The couple return again and the dialogue is largely repeated, but this time their roles are reversed and Etienne embarks on a fanciful and magical conversation with a female passer-by. He asks the woman what the weather is going to be like. She humorously removes a huge decorative barometer from her bag, which gets a laugh.

At this point, the man next to me placed his hat on the empty seat in front and began photographing it.

Etienne and the female passer-by continue their flowery, verbal romance until (again) the last train is called and Etienne abruptly steps away.

Etienne and Irene hurriedly leave for their train and the slightly bereft female passer-by goes about her business.

I have basically just related the plot, because I have no idea what this was about, what it meant or whether I missed the point, but I suspect there was no point as such, other than a poetic use of language. I tried very hard to understand it. I tried to immerse myself in it and – when I completely failed to grasp any meaning – I tried to find some enjoyment in the rhythm of the words and the use of language. It only ran for forty minutes, but I felt even at that length it was over-long.

My opinion differs considerably to previous reviewers and it’s just my opinion, but I’m afraid I didn’t enjoy this at all. I hope others get something from it – tonight’s show is completely sold out – but it’s just not for me. https://manchesterfringe.eventotron.com/?event=37807