Creative, clever and completely contemplative, ‘Secret Life of Humans’ by New Diorama Theatre is a show that questions our genetic structure and our unconscious desire to always uncover the greater truth of why we are who we are.

Set against several different time periods, this show offers a complex look at what it is to be human and how working together can help us discover our greatest fears and greatest ideas.

New Diorama experiment with the norm of fringe theatre from the get-go with a wonderful use of design by Jen McGinley who truly uses the full space in order to get our minds thinking and challenge what we already expect from an afternoon in the theatre. 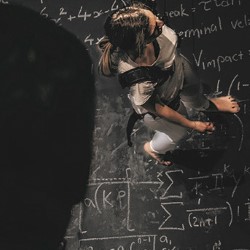 Partly narrated by Ava (Stella Blue Taylor), we are immediately transported into a number of different worlds and I believe that the transitions between these world’s of thought are what truly make this show stand out from its competition. Each actor forms part of this dynamic ensemble, designated to challenge what we think and why we even think it.

Blue Taylor does a lovely job as our translator, if you like, for what is slowly being uncovered throughout the performance, however, the two stand out performances come from Richard Delaney as Jacob Bronowski and Andrew Strafford-Baker as a loveable Jamie. Both Delaney and Strafford-Baker ooze a certain presence and likeability on stage that immediately puts the audience at ease, trusting them and allowing them to give themselves over to these incredible talented actors. Delaney demonstrated strength and versatility in such a complex role, whilst Strafford- Baker delivered a truthful performance that connected with the audience far beyond the walls of the theatre. He left us thinking, talking and questioning his character; in my opinion, the sign of a good actor- when he/she allows us to take their journey with us as if it were our own.

Directors David Byrne and Kate Stanley do a stellar job in ensuring such an intricate storyline can be understood by everyone in the audience, and their experimentation with what is ‘normal’ not only enhanced the world of the play, but also the world of Fringe.

If you want a thought-provoking, wonderfully acted play, this show has it all. With moments of beauty and hilarity, to heartbreak and convulsion, this play deserves to be selling as well as it is. It also deserves to be seen by the masses and discussed in many an Edinburgh bar for many an evening.

‘Secret Life of Humans’ runs until 28th August at The Pleasance.