ComedySportz UK is the North West’s top improvised comedy troupe. Founded in 2001 ComedySportz is a fast-paced improv comedy show where two teams battle it out for the biggest laughs. The players create quick witted sketches, scenes and songs from whatever suggestions are thrown at them by the audience to create a show that’s fast, feel good and always unpredictably funny. There’s a referee on hand to steer the entertainment, call any fouls (the brown bag or groaner), and help the audience decide the winner.

Tonight at the Waterside Arts Centre in Sale a near capacity audience had no shortage of suggestions for both the red and the blue teams. The line ups were, John Cooper, Chris Tayner and Rob Hudson on the red team playing against Darryl Fishwick, Kate McCabe and Sean Mason on the blue team with referee Bron Edge.

To all intent and purposes this was a children’s show and as such the comedy was silly and futile throughout. I was constantly expecting some clever jokes that only the adults would get, however I was left still waiting at the end of the evening. This does not take away the fact that the two teams were endlessly inventive throughout the entire evening.

And then the competition began with a multitude of games where the two teams competed against each other to win points which were totalled up throughout the evening. ‘Top That’ was first up where actions were suggested by the audience and the team members had to perform that action whilst describing something else which resembled that action. This started off with swimming tonight. 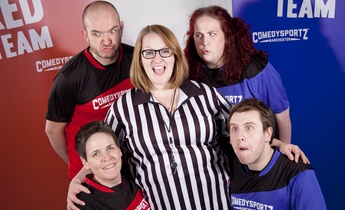 Next up came ‘Sound Effects’ where an audience member was chosen and asked to make the relevant sound effects through a microphone to complement the sketch being played out on stage. Birthday girl Ellie was chosen for this important job, however I am not sure she quite got the idea of the task assigned to her which in turn made the whole scenario funnier.

‘Fairytale Countdown’ was the next game where another audience member chose a well know Fairytale (Snow White) and was then asked to tell the story of it in 15 seconds. The teams then had 30 seconds to act out the entire story. On completion of that they then had to do it again and again with the time being reduced to 15, 5 and 3 seconds respectively.

A couple of new games were tried out during the evening with one being ‘Jelly On The Floor’ and for me I hope this does not get used again as it simply didn’t work and the less said about it the better!

‘Charm Offensive’ was a very clever game where the audience submitted (nice) insults which were written down on pieces of paper and then the blue team who had been sent from the room returned to play out a sketch inserting the insults into it whilst turning them round to be complimentary. This was one of the two best games of the night in my opinion and certainly kept the two teams on their comedic toes.

The second half of the night opened with another of the best games, ‘Audience Items’. During the interval the audience were asked to submit personal items and the cast were then tasked with using them in a comedic way one at a time. A slipper, light up keyring and a ration book (no idea where that came from) were used to great effect. Another joy was the game where the cast could only speak in questions without hesitation or repetition. On paper this sounds easy, trust me it isn’t!

After all the competition the scores were totted up by scorer Liz and the blue team came out victorious tonight in a fun contest. As I mentioned earlier this is a show that appears to be aimed at children more than adults. I am not sure if this was a case of playing to the audience assembled tonight or a more general thing but it makes for a fun night out for all the family.

Comedy Sportz visits the Waterside in Sale on a monthly basis and returns on the 20th February with a Valentine’s special where the boys will be pitted against the girls. After tonight’s hilarity who knows what could happen? One thing is for certain it will be the ultimate match and one not to miss.