With comedians these days spurting out crude and inappropriate gags, it is refreshing to indulge in a night’s entertainment that consists of pleasurable, relatable jokes that provide ‘laugh-a-minute’ humour. Comic genius Tim Vine excels in this, known as ‘King of the One-liners’ and Guinness record holder (until November 2014) for the most jokes told in an hour with 499.

Also known for his role on the BBC series Not Going Out, Vine is originally from the Surry town of Cheam, a place he used as the target for some of his jokes, but not on this tour. Supported by Preston-based Tony Vino - who states the fact he was chosen as Tim’s support is due to the fact that his name bears resemblance to his main act. That well-known search engine even asks 'did you mean...'

Tony’s set is also genius, with local references and puns about his parents’ heritages; his father being from Malaga and his mother from Glasgow. He completes his outstanding routine with a recreation of the ‘Pride Rock’ scene from The Lion King, calling on members of the audience to wear animal heads and join him on-stage, some creating Price Rock and others as on-lookers. This is a great ‘warm up’ of things to come after the interval.

Unsurprisingly playing to a sold out Grand Theatre in Blackpool, Vine’s shows are admired by many who have or haven’t yet seen him. Those who haven’t are certainly in for a treat and those who have are too. Opening his section, Tim states during the off-stage introduction that “there is only one reference to Mary Poppins in his ‘Tim Timinee Tim Timinee Tim Tim To You’ show and that was it”, that being said he does begin with a selection of witty Chimney related jokes, before progressing rapidly - as he does - to so many quick quips, as well as many clever and innovative creations from his prop table and bag. It was nice to hear the added touch of 'Let's Go Fly a Kite' as we left the auditorium, intentional or otherwise.

In an intimate theatre like The Grand, it is easy to hear the wonderful sound of laughter and it is clear that each person watching will have left the theatre feeling a sense of release. The audiences are literally bent move and in stitches with fits laughter but rest assured that no members were harmed in the making of this review. 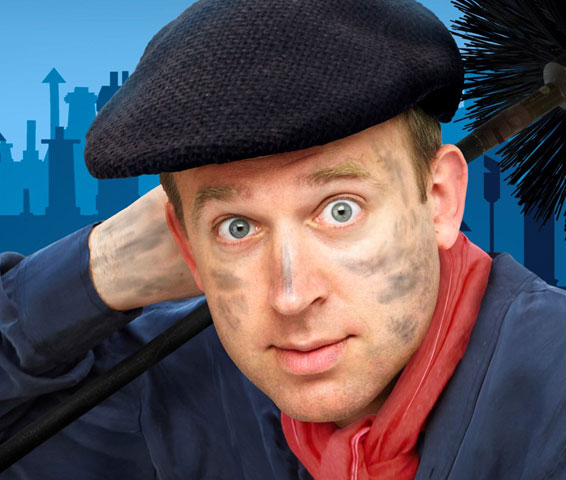