Alfie Moore - The Naked Stun at The Lowry

Alfie Moore is a Police Sergeant with eighteen years' experience of The Job (currently on sabbatical) and the host of Radio 4's "It's a Fair Cop". He also has several television credits to his name.

Alfie took to the stage: smartly dressed with very shiny shoes and I immediately liked him - he was warm and instantly likeable with a friendly smile and he actually does look like a Policeman (that's a compliment, Alfie) and there was just something really - well, nice about him.

The show has two parts to it and Alfie explained that the second part is the 'main' show.   The first part is the 'getting to know you' part - this struck a little bit of fear into me and my theatre companion as one of our biggest fears is being picked out and forced to speak.   We decided we would exercise our right to remain silent if this happened and give a no comment interview. Fortunately, we were released without charge.

Alfie has an easy style of delivery which makes you feel relaxed and it's like being in the company of an old friend who makes you laugh. A lot.

The first half of the show had a lot of audience interaction; Alfie asked various people their first name and then we had to think of a famous person with the same one as apparently, this makes it easier to remember someone's name (you'll all be trying this tomorrow).

He is very good at quick fire gags which were really funny and the audience clearly thought so as the laughter kept on coming.   His delivery is almost nonchalant and he is very unassuming - he doesn't wait for a response in a self-congratulatory manner like some comedians.

I did feel that towards the end of the first half, he was marking time a little to get to the interval and then the 'main' show but it was still a very enjoyable 45 minutes. On reflection, I feel that the second part of the show was a little slicker than the first - he does rely on some audience input in the first half and getting a response out of some of the people was a little like pulling teeth so he did very well.

The second half comprises a main story ("The Naked Stun") which is Alfie's experience in the Police force of tracing and attempting to catch and arrest a serial 'flasher' - who was naked, apart from a shower cap and flip flops.   The story is interspersed with other anecdotes which were hilarious, particularly the one about Alfie's marital dispute about the kitchen bin and whether it was full or not. He also covered subjects such as his fascination with American cop shows which inspired him to join the Police and a spicy story about the lure that the Police uniform has for the opposite sex. Even when he was telling this rude story (which was very funny), he did it in an inoffensive manner and there was even some mime involved which was done tastefully "because you're a nice audience".

The "Naked Stun" story was funny and interesting and I really wanted to know if he got his man...we had two endings to that story: one was what Alfie would have liked to happen and one was what actually did happen - both versions told extremely well.   At several points during this story, the audience were totally enthralled and clearly fully drawn into the tale as you could have heard a pin drop.

At the end of the show, Alfie left the stage but exited through the door in the auditorium - this was so he could shake hands with each and every person and thank them for coming to the show. What a really lovely gesture when I'm sure all he wanted to do was go backstage and check if the bin was full. 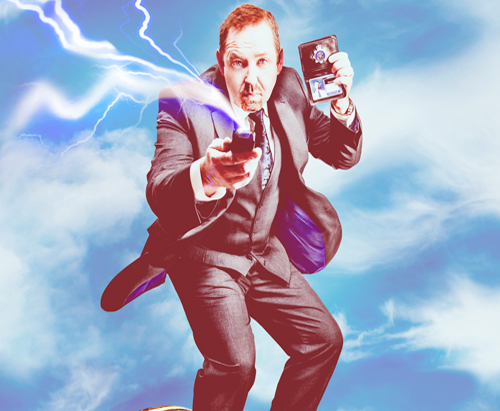