Does it get any more British; than a traditional Sunday lunch and an afternoon of Al Murray at the Lowry, unless you add perhaps a pint of British ale in the interval?

Al Murray bounces on to the stage and has the audience giggling in seconds as he finds his first victim in the audience, a man with a bold fashion sense, who is ripped mercifully by Murray for a striped shirt which has been described as a 4 year olds outfit, it was a very funny observation and the audience were immediately settled in for an afternoon of laughter. 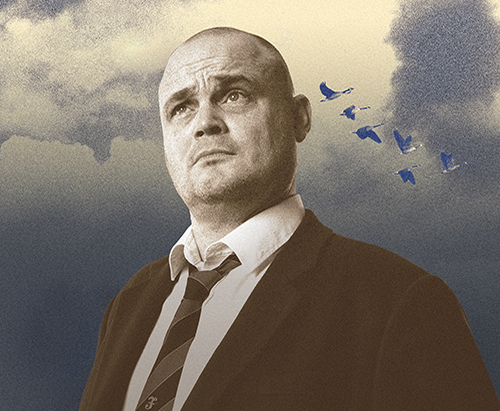 Murray pours himself a pint from his central bar on the stage and persists in wetting the entire front row while exclaiming; 'you book the front row, you’re going to get wet'. The stage has banners adorned on the wings with the slogan 'Let's Go Backwards Together' which is the name of the tour, the first half of which is on examining Brexit and why 52% voted out, the majority of the show is taken up with audience participation which the pub landlord does very well, his way of interacting with audience members and making it humorous without offending is an art form, where many other comedians struggle, Murray thrives.

Although, he tells us he never voted, you do feel that the pub Landlord was not happy with the Brexit result, and at times it does come across a little patronising and risky, but satire is just that, it should be risky and in an area such as Salford where leave voters are the majority, it was definitely risky, jokes which were actually on his audience, a lengthy explanation of every immigrant group that's ever been in the country right back to Romans, shows how he dissembles the leave votes campaign, but he keeps it fairly light and laughs off the fact that we will be leaving 'a peaceful Europe'.

During the second act, the Pub Landlord's chauvinistic persona is evident as he touches on sexism, stereotypes and trans gender, somehow he manages to make light of these and get laughs which is a hard thing to do, at times during the second half I felt a little bored and it felt repetitive, maybe with such a cultural shock such as Brexit, he could of delved more into how the Pub Landlord evolves following a vote which sees Britain on a path for independence, something that the character wanted for years. As the show finishes with a sing song on how we should go back to 1955, the audience are amused enough to join in and laugh in the face of adversity as a country very much divided by Europe. The Bloody French as Al Murray would say.