This is the second Drama festival of its kind. Hosted this year by Macclesfield Amateur Dramatic Society (MADS), it is staged over three days with nine plays in contention for a place in the AETF Northern Semi-Final which takes place on 9th and 10th May 2020. The winner of the Northern final will progress onto the AETF Grand Final due to take place on 13th June 2020.

Another triple offering of very different styles of play, written and performed to a very high standard.

Girl in the Machine by Stepf Smith - Nantwich Players

Set sometime in the future, this play follows the life of Polly (Bethany Froud) and Owen (Colin Johnston), a married couple trying to live with the technology of the time. We are drawn into their world where the everyday norm, becomes saturated with gadgets trying to lure them away from reality, enticing them to live an out of body existence, rather than facing up to their problems.

Polly is a corporate lawyer, who has a stressful job and struggles to cope with anxiety. Her husband Owen is a nurse and almost feels that his job is inferior to his wife’s as she moves up the corporate ladder.

With the idea that a stress relieving gadget the hospital has been testing, might help his wife’s anxiety, he brings home the ‘Black Box’.

The ‘Black Box’ is a virtual reality experience which supposedly helps to calm and relax you and indeed, when Polly tries it for the first time, she relaxes and falls asleep, not realising she has spent over an hour using it. It is clear, at this point that Polly has an addictive personality, Owen complains about her constantly checking her phone.

The staging for this play was cleverly designed.  It decreased the depth of the stage by using a black backdrop, but with added LED lights, it created a futuristic feeling and gave the actors a rear exit that helped the play to easily flow between scenes. The virtual reality glasses and black box reaffirmed the futuristic nature of the play expanding upon the theme of gadget addiction. The relationship between Owen and Polly was being tested due to Polly’s reliance on the Black Box, and the actors clearly demonstrated the emotional battle Polly was fighting to try to pull herself away from her addiction, while Owen was desperately pleading with her to come back to him, and reality.

This was a well-directed play, fully using the stage, so that the audience was drawn into the drama. This well written script was well interpreted by the director Jeremy Acklam, who also designed the lighting and sound; and the actors Bethany Froud and Colin Johnston can be congratulated on a wonderful performance.

Neston took us back in time to 1985, with a true story written and directed by Helen Boothby. Teresa O’Leary (Emma Griffiths), is starting a new job after completing a few days training. She is nervous as she has no previous experience and when she arrives, cannot find the Manager. 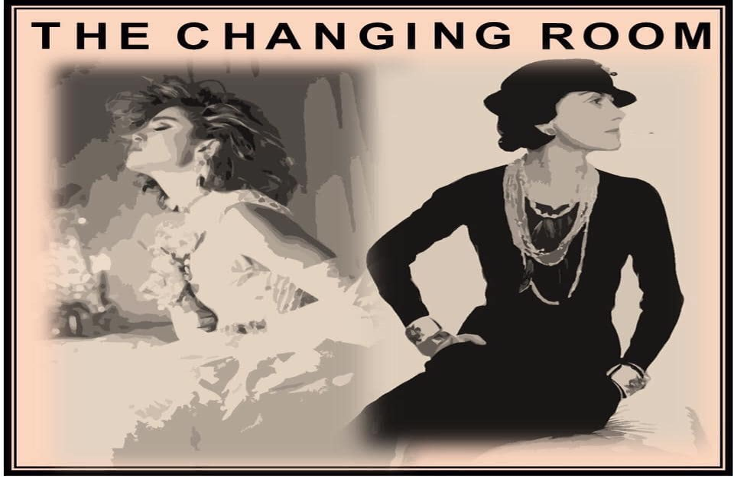 The play is set in a Liverpool department store in the lady’s section and upon arrival she is greeted by Mrs Morgan (Sarah McGinty), who is rather nervously, preparing to visit Mrs Hereford-Jones, the manager of the department store. Mrs Greenwood (the lady’s department manager), is unavailable, so Teresa is thrown in at the deep end, looking after a customer that is an early visitor to the department. Gerald (Vince Perry), needs some help!

From the beginning, the charm of this play radiates through to the audience. Without giving too much away, the play examines the way that people sometimes feel the need to hide parts of their personality that they feel won’t be socially acceptable. A judgemental society sometimes holds back an individual’s need to be themselves. At a time when social media accentuates and scrutinises our differences, this play is a reminder, that we have simply re-packaged how we judge people, who are perceived to be different.

The well-balanced stage meant that for the audience, there were no blank empty spaces and the cast had space to move around, as you would when working in a store. The script was well written and very humorous, and the costumes were very 1980’s. The humour created warmth in its delivery, and anyone watching this play who lived through the 1980’s, would leave the theatre with a feeling of nostalgia.

Dez (David Lee), is engaged to be married, and has decided to go camping with his buddies for his stag party. Set in America, we see four adult men supposedly having some male bonding, cooking on the barbie, drinking beer and telling stories.

Sean (Martin Bernado), is a divorced musician, Andre (Dylan White), has been married for 19 years and Boardman (James Whitelock), is very single. 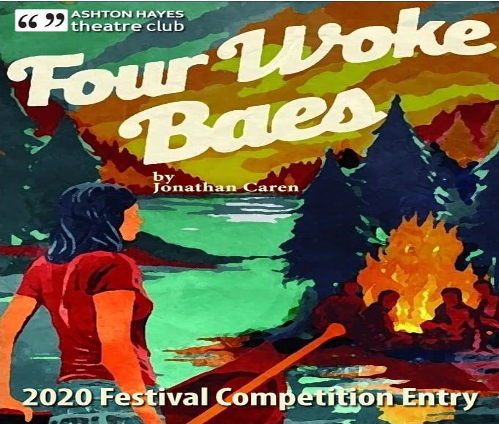 What initially starts off as reminiscences about the past, leads Andre to discuss his stag night, where a stripper was hired, and everything that occurred later that led to his friend Joey’s divorce. At the beginning of the play, Dez recites a monologue explaining why he is dubious about marriage as when he was young, his parents’ marriage ended, after they both had affairs.

To throw something else into the melting pot, Emma (Nita Lawton), arrives at the camp, telling them that they have camped on her pitch. She is travelling alone and decides that it is too dark to go elsewhere, so she will just pitch her tent there for the night and the guys can move to their own pitch in the morning.

They invite her to join them, sharing their beer, but tension builds escalate as the conversation continues the theme of relationships and sex.

Exploring the subject of relationships and monogamy, Jonathan Caren’s play examines our attitude towards love and sex and the dynamics within a loving relationship. The staging of this play was effective in its design which created the impression that the guys were camped in a wood. The tents at the back of the stage, the deckchairs for seating and the beer and barbecue meant that the feeling of buddies hanging out together to do guy stuff, really came across. The personalities of the guys were so different, that the interaction between them was interesting, as they attacked the dialogue from different perspectives. Emma’s arrival created the right amount of tension in the group, as they all wanted her attention for different reasons.

The lighting helped to create the feeling of night-time, with an eeriness, but we needed to see a contrast when morning came, as daylight appeared.

A well thought out, well written play, that was enhanced by its implementation.

The Festival has one more session – Sunday 15th March at 2pm. It promises to spotlight new One-Act plays produced by our own local Amateur Companies.