This is the second Drama festival of its kind. Hosted this year by Macclesfield Amateur Dramatic Society (MADS), it is staged over three days with nine plays in contention for a place in the AETF Northern Semi-Final which takes place on 9th and 10th May 2020. The winner of the Northern final will progress onto the AETF Grand Final due to take place on 13th June 2020.

During the first evening three very different plays were showcased, and the standard was high.

One of Shakespeare’s much-loved plays was a good choice to present as an adaptation. This play, perhaps more than some other of Shakespeare’s plays lends itself to being streamlined. With some wonderful material already to hand, the adapter’s role is to make the play run seamlessly, whilst selecting the most entertaining scenes to include. 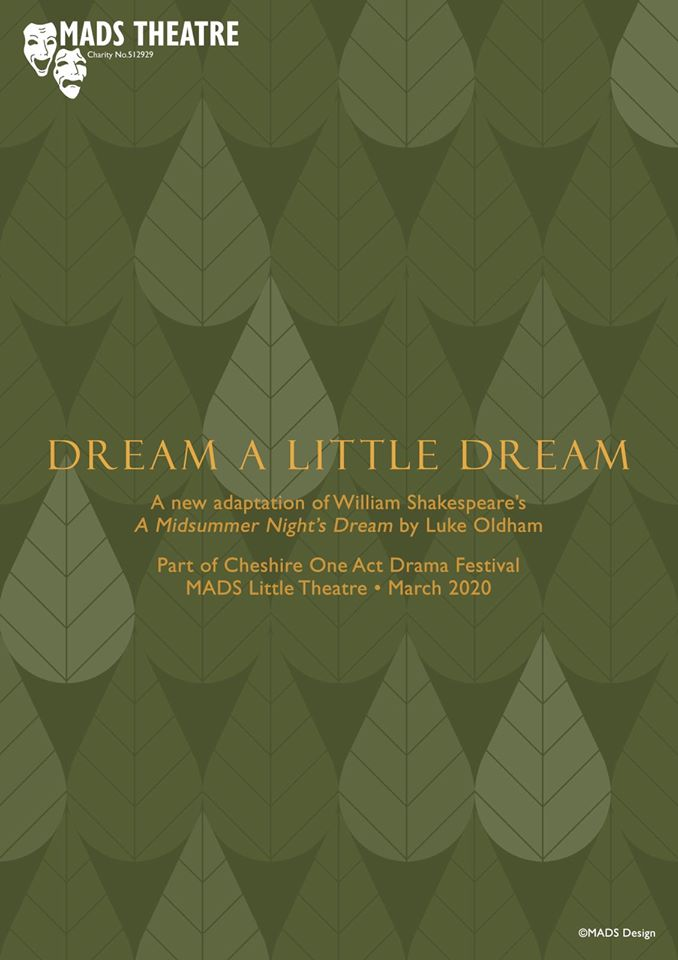 There was no point during the play that my attention was not completely focused on the stage. There is a lot of space to fill on MADS stage, but each small scene was interlinked beautifully, and the direction made sure that there was always something to see. The language was kept as Early Modern English, but with updated costumes and the interaction between the characters, the play somehow took on a more modern twist.

One of the most entertaining of Shakespeare’s comedies, this play always seems to be more accessible to non-Shakespeare lovers, who may struggle to follow the plot line due to the language used. To completely modernise the play, it could have taken a step further and presented the play in Late Modern English, therefore, taking away the language barrier for some. Making Shakespeare easier to understand could bring this play to more mainstream audiences, but would it take away its charm?

The director of the play was also the writer, and it shows that Luke Oldham had a very clear idea to keep the play as Elizabethan, but to tweak it for the modern audience. Gender swapping in performance was done in Shakespeare’s era and has been resurrected in recent years. Oldham made his choice well, as Titania, Queen of Fairies is such a beauty, it is instantly funny, as it had a tongue-in-cheek approach.

The characterisation worked well here. Even though the actors played multiple roles, small alterations in costume helped to define each character. The play was fast moving and energetic and would suit the younger audience who would struggle to sit through a long Shakespeare play. An excellent choice, with well-honed performances.

Dave - A Cautionary Tale by Will Haycock - DTAT

This collaborative young company have produced a newly written play set in a local Hermetic Order and discover that “You can’t always get what you want. But if you try sometimes, well, you just might find you get what you need.” 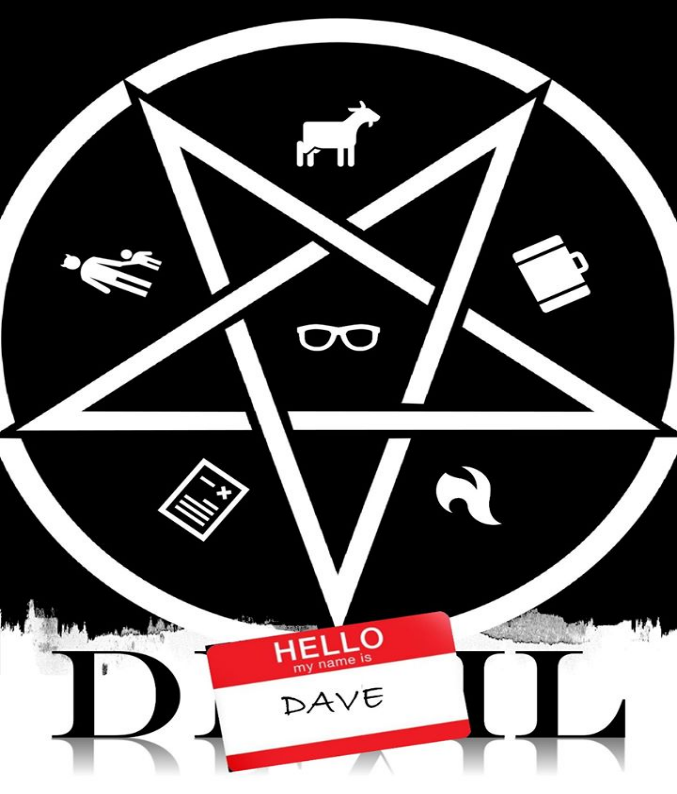 Dressed in ceremonial robes the High Priest, Richard Beaver (Alex Wright), surrounded by a magic circle of candles, begins summoning Lucifer. Other members of the Hermetic Order walked down the stairs of the theatre carrying candles and chanting. The atmosphere has been created, and a feeling of not knowing what to expect, piques the interest of the audience.

Having raised our expectations, we are introduced to the Hermetic Order members, and then to Dave, who appears in the place of Lucifer; as its Friday 13th and Lucifer is busy!

The humour in this production works very well. The comedic lines were very relevant to current affairs, although this would need to be kept up to date if the play moves forward, to keep it relevant and funny.

The two main characters Dave Scratch and Richard Beaver showed a strong sense of character, even when Dave switched his character later, this was so successful as each character, was held onto consistently. In some cases, this was less successful with the Hermetic Order members, it sometimes felt jumbled and the character changes were not as clear.

Overall, I loved the ideas. The team approach works well, but this play would benefit from, someone standing back and directing the play who is not involved in its performance. I think this play is worth pursuing. For entertainment value, it was wonderful.

Electric Fables has a mission to bring new original theatre to Cheshire. The setting for this play is Earth, after the humans have died out due to their own self destruction. Robots are working to re-populate the planet with plant-life and animals to build a new eco-system. 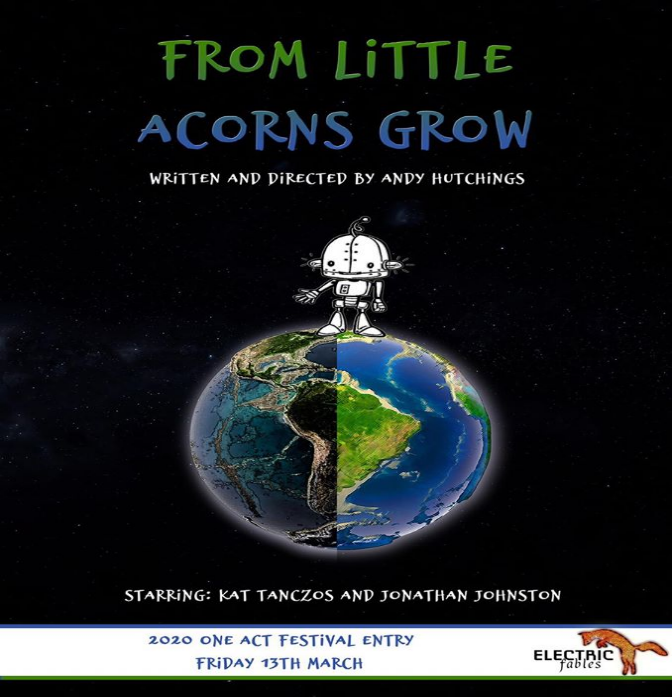 One such robot is Acorn (Kat Tanczos). Acorn is a gardening bot in charge of planting seeds and reports to the mission controller Albion (Jonathan Johnston). In turn, Albion manages the rehabilitation process of Earth, and organises the robots with their own duties. During the play we are also introduced to Smasher, Conker, Bovinae, Watchman and Eve; other robots all played by Jonathan Johnston.

With very little help from props or staging, this play is focused on a well written script, and the interactions between the characters.

Andy Hutchings provided the performers with some interesting subject matter, which draws on the theme of climate change and the destruction of our natural world, at the hands of humans. Acorn along with other robots is working on creating a ‘Garden of Eden’, but in doing so the planet must be cleared of the man-made constructions that disrupted our eco-system and led to our Earth’s demise.

Robots are used to focus our attention on the work to be done. Acorn, is used as a form of Narrator, bringing in the different robots via memory downloads to her system.

Acorn is assisted with lighting and sound to help develop her character as a robot. This could have gone a little further, as lighting assistance was kept to a minimum. Lighting blackouts were used to divide Acorn’s memories into smaller scenes, but it could have been used to larger effect.

The stage looked empty at times, and as mentioned above, the further use of light and dark could have helped to make the stage feel smaller, therefore focusing our attention on the characters. In turn, this would have kept the audiences gaze on the subject matter making it feel more intense.

Both actors worked well together and Johnston’s ability to morph into the different characters for each robot worked well.

A wonderfully written play with a theme which will appeal to a wide audience, including children.

The Festival has two more sessions – Saturday 14th March at 6.30pm and Sunday 15th March at 2pm. It promises to spotlight new One-Act plays produced by our own local Amateur Companies.

To book tickets go to https://www.ticketsource.co.uk/madstheatre/cheshire-one-act-festival/e-bmajbx