The Dawn of Dracula - The Brindley, Runcorn

Attending a vampire play just a couple of days following Halloween was great timing as I was still in the spooky mood and as a lady behind me said – “will you hold my hand if it gets scary” I think we were all ‘up for’ a few thrills. Being in the small theatre at Brindley really made us feel that we were part of the play and enabled us to view the actors and even hear them breathing and as it was later – screaming in our ears.

The set was intriguing with a bed, door, lamps and an open coffin and it started with a man leaning over the open coffin with a stake in his hand. I was really looking forward to seeing this play directed by Soup’s chairman the multi-talented Michael Pirks.

We then are transported back to a happy scene where Jonathan Harker and Mina Murrey (played by the fabulous Gary Corrigan and Hayley Northey) have announced their engagement and Jonathan explains that he needs to leave his betrothed to venture out to a place in Transylvania to meet the elusive Count. 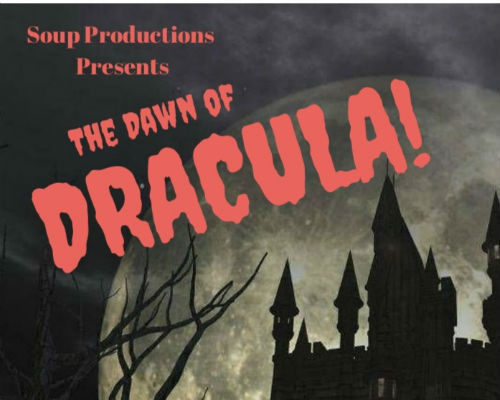 The costumes of the cast were brilliant depicting late 19th century garb and that essence of decadence.

On arriving at the gloomy and smoke filed Transylvania we are met with the sombre village people who spoke of the evil within the place. The sound track was superb, and we all felt the ‘chill’ As Jonathan enters the Counts castle – a tall caped man meets him. He was somewhat underwhelming as Dracula although stature wise he was perfect.

And so, the tale unfolded with the devoted Jonathan being kept captive at the castle by the count and the three vampire maidens and his beloved Mina at home missing her fiancé and worried about his wellbeing. Her friend Lucy (played by the fantastic Ellie Stenson) has 3 suiters the aristocrat Arthur Holmwood, the American Quincey Morris (both whose diction was heard to hear and would have benefitted by slower and clearer speech) and the very talented Dr. Jack Seward played by Michael Pirks - who was truly (and believably) besotted with Lucy.

Dracula had now moved to London to own the beautiful Mela and he seduces Lucy in his path and the vampires wreak havoc across the city. Welcome on board the charismatic Professor Van Helsing played by the equally Charismatic and talented Matt Orrrillard who brought a great ray of humour to the play. He (having had some vampire experience) seeks Dracula out to kill him once and for all.

I don’t want to give the whole story away, as this take on the famous Dracula story has a twist of its own and is well worth seeing for yourselves. The man of the moment must be for me Simon Choat who played the insane Renfield – who conveyed a mentally disturbed being brilliantly – he was a devoted follower of Dracula and had the charisma and presence that the Count himself lacked. Excellent performance.

The leads were excellent, the sound effects and costumes fantastic. It was a pity that the scene changes were a little clumsy and could be viewed by the audience and a curtain to cover this would have been very beneficial.

All in all, a very enjoyable play, with excellent leads and great atmosphere.

Well worth watching. Go and see this and be ‘spooked!’