With just a jump to the left and then a step to the right… the time warp will take you right back into the world of Frank N Furter and Rocky Horror, or rather, to the wacky imagination of Richard O’Brien, circa 1973. More than 40 years on, the Rocky Horror Show continues to tell the story of Brad and Janet and their flat tyre, their subsequent encounter with a mad transvestite scientist and their journey of self-discovery. This newly designed production comes at you full throttle, and the set provides the perfect backdrop. Thanks to the creativity of Hugh Durrant, the stage is cleverly wrapped up like an old spool of cinematic film, never letting us forget that we’re enjoying a science-fiction picture show; and while Sue Blane has updated her original costumes, the iconic wigs, corsets and fishnet stockings remain happily and unashamedly front and centre. 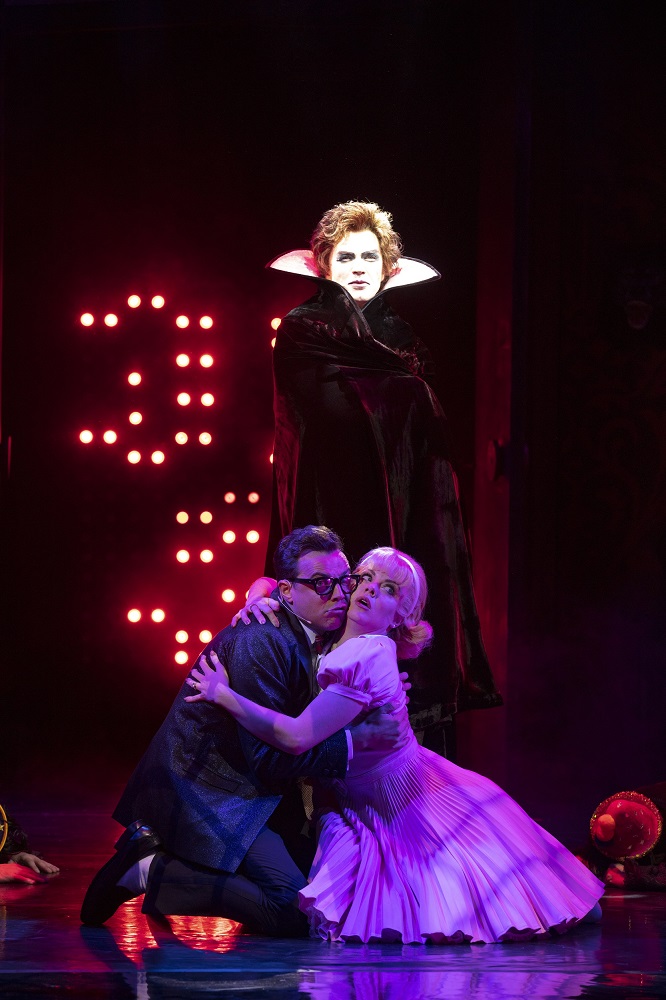 The Rocky Horror Show has been on my radar for as long as I can remember, and it does form part of our collective cultural history. Having said that, this was my first visit to see it live, and it truly was an experience. Dressing up in homage to your favourite character in the show is the norm, and more than once during the show people leapt to their feet to join in the dance choreography. I had underestimated the number of people that would be singing along, or providing additional comedy moments with their (semi-)scripted heckling. On that note, I have to single out Philip Franks as the narrator, who somehow managed to keep a straight face regardless of what the audience members shouted at him, and snapped back some extremely topical and entertaining comebacks without ever losing his train of thought. I was extremely impressed!

The whole production was a joyful riot of sound, colour and movement, with the classic set pieces showcased almost to perfection… at times possibly even to the detriment of the rest of the show, although I did wonder whether that was the point. Particularly in the first act, both the cast and the audience seemed very happy to race towards the well-known numbers of Damn it, Janet, The Time Warp and Sweet Transvestite with little emphasis on any of the plot in between. However, that certainly didn’t stop anyone from enjoying themselves, and the enthusiasm in the auditorium only seemed to increase as the plot got even looser in the second act.

This version of the Rocky Horror Show continues the current theatre trend of putting the band on stage, though here they are situated above the action to allow for free movement in the space. However, I’m not sure whether it was the band’s location that led to some sound distortion, or simply that the sound engineer had turned up the volume so loud to keep up with the audience, but whatever the reason, the music did feel a bit excessive in places which meant that some of the performers were hard to hear clearly, although as a self-advertised rock n’ roll musical, the sound department may just have wanted to create an appropriate atmosphere. Regardless, the whole cast, comprising both new and familiar faces, all seemed to be having a great time and gave every ounce of energy they had throughout.

As a musical theatre fanatic, this was definitely one to tick off my list, but if you’re a traditionalist who frowns upon audience interaction, then this one possibly isn’t for you!

The show runs in Chester until Saturday 21st September, and then continues around the country: https://www.rockyhorror.co.uk/tour