Usually I write my reviews immediately after a show, however Circus of Horrors: Psycho Asylum was a rare occasion where I needed to sleep on it to work out my thoughts. When a show involves a dwarf pulling a Henry Hoover around the stage by his penis, well, that’s not something that can be reviewed easily in 500 words.

But I’m getting ahead of myself. You may have seen some of the Circus of Horrors crew on Britain’s Got Talent in 2011 and perhaps it has made you want to come along to the show tonight. Honestly? Don’t bother. What you saw on BGT is as good as it gets. Better than in fact.

I am surprised to see children in the audience (although perhaps this is thanks to BGT which has made it seem like a family friendly show), when there is a lot of swearing, crude comments and awful jokes in the first few moments. It feels like a lame show at a tacky holiday park off-season.

Overly-loud music cannot distract from the fact that this show is lacklustre and slow. The dance moves look like they were choreographed by a group of GCSE students. Sure, drumming with sticks that are on fire look really cool but when you are both drumming at different times, and doing the same 3 simple moves over and over with no variation, I am bored. 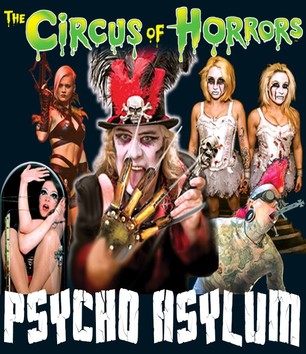 There is the odd moment that is impressive, such as the lady on the silks, but everything else is slow and clunky. Things are getting knocked over on the stage, the microphones aren’t very good and I don’t understand why there are so many moments when nothing at all is happening on stage.

The “story” (and I use that term loosely) starts in a “psycho asylum” which is problematic in itself, but it seems to entirely lose its way around the half-way mark and suddenly it’s more of a carnival (with terrifying clowns that seem to have no context) and “Voodoo dancers” performing some pretty cool counterbalances.

At first I think the show has picked up a little, after all, these dancers are at least talented, but again, things are slow and repetitive, and frankly a little lazy. Performing the same balances but facing in different directions is a lazy way of filling time and was noticed by the audience.

A lot of the ‘act’ was simply peacocking at the front of the stage, expecting riotous applause but receiving nothing but lukewarm polite clapping instead.

For example, a man with a Bane-esque mask threw a large Thor-esque hammer in the air for an uncomfortable amount of time. We have no idea how heavy this is supposed to be so it’s a little boring.

There was some awkward, clumsy audience participation. Four men were called onto stage, and the excitement was palpable. Sadly, they ended up doing the trick were you sit on stools, lay back and end up moving the stools to create a counterbalance. I don’t know about you but I’ve done this is team building exercising at work, it’s hardly something to be amazed at.

Again, the small professor/doctor/scientist(?!) makes his return and this time, for no apparent reason, staples some playing cards to his face, eats a light bulb and lifts a plank of wood using his penis. Again.

I will say that the women were very beautiful, and their costumes were fab. There is definitely some talent in this group, but it’s a little tired, and overdone, and there’s just a lot of filler.

The real horror in this show are the outdated, awkward “jokes” and pure tediousness.