With a cast of several hundred actors, singers and musicians, and held in Chester’s stunningly beautiful cathedral, the Chester Mystery Plays of 2018 are a remarkable achievement.

Cycles of mystery plays, originally written in Latin, were rewritten in the vernacular to help common folk understand the stories of the Bible. Performed by the city guilds, the plays were a true community event. Many cycles were lost during the Reformation, but the Chester cycle was revived for the Festival of Britain in 1951. Since then, a selection of the surviving 24 plays has been performed every five years. It is a massive undertaking. 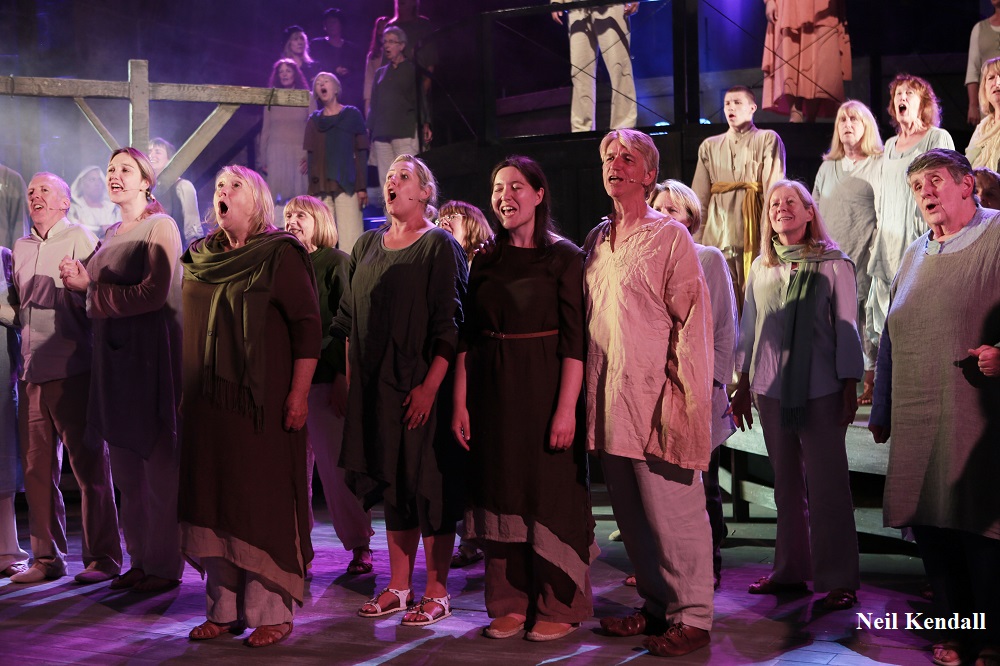 One of the many challenges is how to make the material relevant and accessible in a time when the audience’s familiarity with the stories cannot be guaranteed, and to form one cohesive play from the original 24, condensing three days’ worth of drama into one evening. Writer Deborah McAndrew has achieved this by focusing on two themes that resonate with audiences today – Nature and Conflict – which recur and intertwine throughout. Hence, we see God’s most beautiful angel, Lucifer, cast out of heaven for the sin of pride, determined to corrupt and destroy God’s creations: the Earth and Mankind. Thus, throughout the centuries, the Holy Trinity enters into conflict with Lucifer – Eve eats the apple, Cain kills his brother Abel, God brings the flood to wash the Earth clean, and eventually Christ is born to redeem Mankind, setting in train the story of the Passion, and finally the coming of the Antichrist and the final judgement.

This recurrence of themes is also reflected in the music, with the ethereal angelic voices at the beginning setting the tone for the evening. Composer Matt Baker’s use of the haunting ‘Ego Sum Alpha et Omega’ emphasises God’s eternal presence while the ancient text of ‘Adam Lay Ybounden’, along with other themes, including the war-like drumming for Cain’s murder of Abel, Herod’s murder of the innocents, and the crucifixion, reflect the textual cohesion, and in the setting of the cathedral, gain immense power. 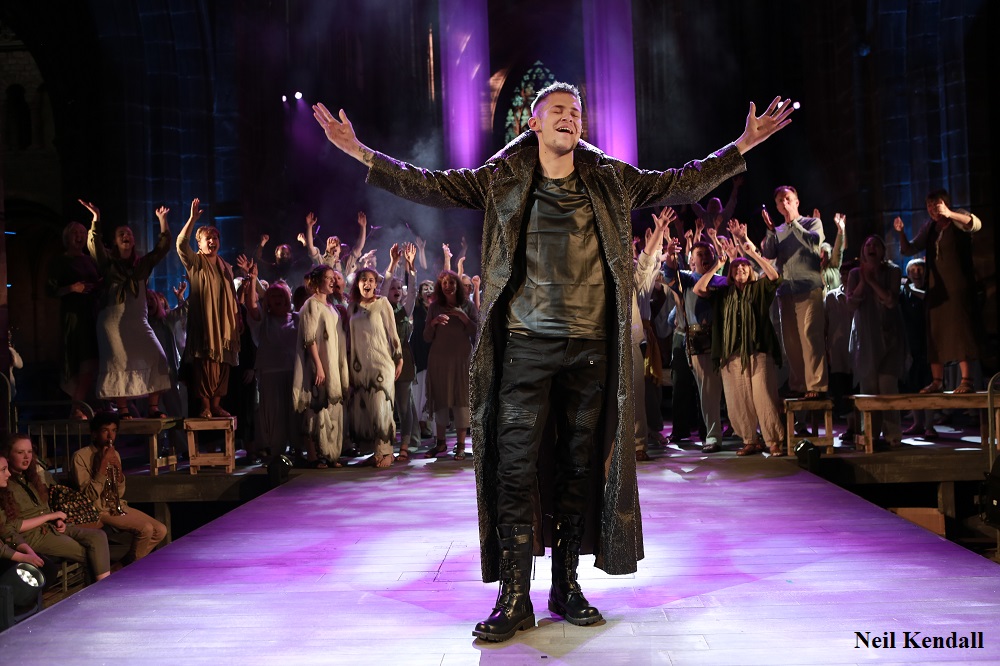 Indeed, both the setting and Dawn Allsop’s design play a hugely important role; set, costumes and props again reflect the theme of Nature, with many elements being reused or recycled. The natural palette and simplicity of the costumes give them the timeless element that brings the stories into the present, emphasising the relevance and creating dramatic unity.

Regarding the cast, what can I say? Volunteers speak of a family atmosphere and sense of community, which makes it difficult to select individual performances. However, to highlight just a few, Becca Gates-Patch’s ability to shift from beguiling tempter to gutteral sower of discord and evil makes her an excellent Lucifer; Sam Baker is outstanding as Cain, whose presence at moments of violence and ultimate reinvention as the Antichrist are a constant reminder of the perpetual nature of the conflict between good and evil; Carol Rannard as Ciaphas is simply magnificent, making her own way into Hell at the last judgement; and the children are simply perfect.

A ‘highlights’ would contain the initial angelic voice floating through the cathedral; the creation of Adam and Eve; the children singing at the nativity; the ‘babies’ unfolding into fields of poppies in the soldiers’ slaughter of the innocents to the accompaniment of the WW1 song ‘God be with our Boys tonight’; the crucifixion; and the final darkening of the cathedral with the spotlight on the statue of Christ on the cross. This is not a polished professional performance; it is much more than that. This is a community coming together to create something powerful and magnificent, something that connects them with a community from centuries ago. Don’t wait another five years. See it now.

Playing to the 14th July https://chestermysteryplays.com/