Being a teenager isn’t easy - you have to try and fit in with the crowd, while trying to discover who you are. ‘1972: The Future of Sex’ by Wardrobe Ensemble tells the story of 8 teenagers / young adults in the 70s and their discoveries of sexual arousal.

While the action is taking place on stage, Tom Crosley-Thorne is in the corner playing on his guitar for practically the entire play. 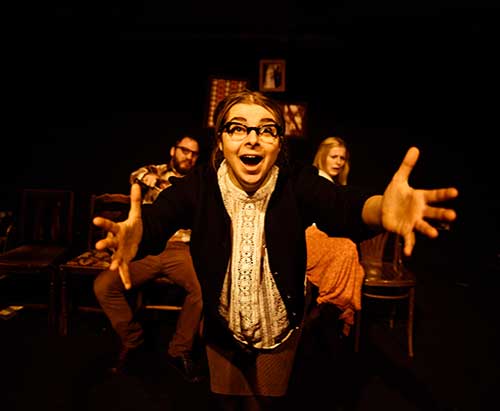 There are four microphones set up in the corners of the stage, allowing the cast to narrate the story.

The action sometimes shifts through the decades. While this was perfectly fine to do, but I don’t think it was absolutely necessary, in particular the reference to the character of Brian that would go on to become a homophobe in the 80s - it brought in a really dark moment into what was a comedy up until that point.

By the end of the piece I was in no doubt that the 1970s was possibly the most important decade in shaping the opinions we now hold about sex, and allowing people to express themselves in whatever way they want. It goes to show that nothing has changed dramatically in the past 40 years. ‘1972: The Future of Sex’ is a show that everyone can relate to.