An Evening With Chris Packham: Growing Up Wild - The Lowry, Salford

Chris Packham is probably best known for being one of the co-presenters of Springwatch and Autumnwatch, although he has a career in wildlife television ('The Really Wild Show' with Michaela Strachan being one example) and is also quite outspoken and vocal about various issues concerning wildlife and conservation. This tour, which runs until August, is Chris promoting his new book 'Fingers in the Sparkle Jar' which is the first part of his memoir and covers the years 1966 to 1976.

Chris was accompanied on stage tonight by Patrick Barkham, a writer and journalist (Natural History writer for The Guardian) who facilitated an interview with Chris, asking him about various incidents in the book and also prompting him to tell stories from his life. Chris also read a few extracts from the new book.

I have to say that he certainly isn't what I expected.   He came across rather differently in person than he does on television. He didn't speak directly to the audience during the talk but answered Patrick's questions very methodically, with little eye contact. It didn't really feel as though we were engaging with him. As my theatre companion astutely observed, however, when on television, he is talking about his passion – wildlife – and is obviously very animated and excited.   I did feel tonight that he would probably rather have been lying in an uncomfortable field with night vision goggles, waiting to catch a glimpse of a Greater Mouse Eared Bat.

It came across very clearly that Chris is passionate about and obsessed with wildlife.   He lives and breathes it.   He actually also eats it. Well, he used to when he was a child.   He spoke at length about his desire when young to find out what tadpoles tasted like...so he ate quite a lot of them... and also some other things.   I have to say this didn't really endear him to me and I was eager for him to move on from this particular memory! 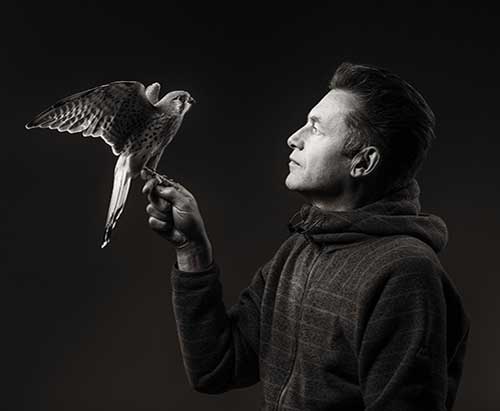 The title of the book 'Fingers in the Sparkle Jar' has a double meaning.   Chris explained the meaning personal to him (minnows in a jar that he collected and put his hand in to feel them swimming around) and alluded to another meaning of 'sparkle jar' and its use to calm children down.   This was an oblique reference to his Aspergers which he talked about quite frankly and openly towards the end of the evening and as he explained, it does go some way to explain his intensity, ability to remember everything and love of lists (apparently he still has lists from the 1980s and one of his favourite lists is his ever changing list of people he doesn't like!).

Throughout the evening, photographs were projected onto a screen behind Chris and Patrick. I assume some may have been his own photographs but there were also photos depicting the culture of the 1960s and 1970s.   This gave a bit of colour to the talk.

Chris is very honest in what he talks about – he spoke about issues from his childhood with no bitterness or self-pity, just telling it how it is.   He was a loner at school and an easy target for bullies because he was different but this seems to have made him a very strong and determined person who just wants to do what he feels passionate about without caring what anyone else thinks.   Unsurprisingly, he identified strongly with punk and felt he'd found a place where he could be accepted because being a punk meant being different.

He is a perfectionist and very self-critical but he really shines from within when talking about wildlife. His passion and intensity are almost poetic.

There was a question and answer session at the end of the evening and the final question of the night came from a teenage boy who wanted to know what he could do to help stop the Maltese massacre of birds.   Chris had spoken very vociferously about this tonight and it was truly horrific to hear the reality of this massacre which goes largely unreported (details can be found on Chris's website).   I thought Chris's response was quite empowering and certainly made me want to stand up and be counted in the campaign against this truly barbaric practice.   He told the young man to "Stand up and get on with it. Wake up every morning knowing you can make a difference. Don't ever give up". Rousing words indeed.

Chris may not have come across as 'really wild' tonight but he certainly fought the corner for anyone who doesn't quite fit in with their peers and most importantly, for the wildlife that he is single-mindedly passionate about.