The Three Little Pigs were brought to the Aldridge Studio at the Lowry this afternoon by The Stuff and Nonsense Theatre Company. Lots of excited children were waiting outside the studio doors waiting for the pigs to get ready to put on the show. The Stuff and Nonsense Theatre Company returned to the Lowry following previous sell out shows. They pride themselves on making theatre out of anything mixed up with a splodge of imagination. They have toured since 2008 with versions of children's classics such as today's show The Three Little Pigs.

The artistic director Niki McCretton has been producing theatre for over 20 years and joined stuff and nonsense in 2008 bringing an array of experience with her.

The show was energetically performed by Peter Morton and Katie Underhay, with a feel of the TV Show Play School (that many parents will recall). Peter Morton who specialises in intricate puppetry and visual performance, trained at The University of Kent taking a Masters in contemporary performance. Peter has worked on the National Theatre's War Horse. Katie Underhay trained at the Royal Welsh College of Music and Drama. She founded theatre company Peafrog Puppetry in 2013, she also works as a session vocalist, costume designer along with composing music for children's theatre.

The set is nice and colourful and simple, and as the lights dim Peter and Katie enter the stage.

First off they start to introduce the show with the time old "Once upon a Time" then Peter goes off on a tangent, making the children laugh out loud and Katie tries to pull him back, ending up doing the opening herself. Peter being much taller than Katie ends up as the Tall Pig and Katie is the Middle Pig. But where is Tiny Pig? A search ensues with Katie and Peter coming into the audience. Eventually Tiny Pig is found and the children find him cute. Tall Pig then tells Mummy Pig that Middle Pig has lost Tiny Pig but he has found him. Mummy Pig (played by Peter) then sticks her head out of the window and tells the children to go and find their own home. 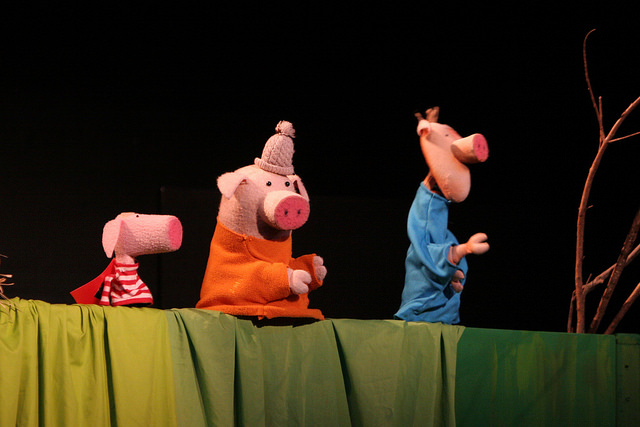 Off they go all sad and set to building their first house out of Straw. Many laughs are had as Middle Pig attempts to build the house. We then get to meet the Big Bad Wolf (again played by Peter), a shout comes from one of the children about the Wolf's glasses. As the story goes the wolf huffs and puffs and eventually blows down the Straw House. Resulting in a fun chase followed by Tiny Pigs quick thinking to give the wolf a cookie to allow the Three Pigs to make good their escape.

Katie now has her turn to try and play the wolf with Peter telling her she is not scary which she quickly disproves. However a clever trick by Peter gets him the wolf's outfit back and the story continues with the Pigs building their house of Sticks. Shortly after building is completed again the Big Bad Wolf turns up and again huffs and puffs till the house collapses.

Work then starts on building a new house with bricks, following completion we again hear the wolf and Katie precedes to get the audience to hide including the adults. Once again the wolf comes a calling this time changing from Peter to a puppet. Again he huffs and puffs and as the story goes he fails to blow the house down. He tries another method eventually getting stuck in the door. Tiny Pig comes up with a plan to get rid of the wolf which requires help from the audience and the wolf flies off never to be seen again.

The finale sees Peter and Katie doing dance moves at the house party that is Tiny Pigs idea, make sure you keep your children away from the isles at this stage as Peter and Katie come into the audience.

All in all this shows is ideal for the younger children lasting around 45 minutes with no interval, and if this show is anything to go by The Stuff and Nonsense Theatre Company are a company to follow for those with young children.

The whole show is supported by Marc Parrett who provides the original direction and puppetry design with lighting designed by Rich Godlin and sound from Gwendolyn Scott who was a member of the original cast with Adam Fuller. Technical management is provided by Ed Trotter.

To see what they have in the pipeline checkout their website at www.aloadofstuffandnonsense.com