An Anatomie in Four Quarters - The Lowry, Salford

Walking into the very highest point of the Lyric Theatre’s auditorium shrouded in total darkness but for about 200 seats illuminated for the audience to sit on, you are immediately drawn into what was a spectacular performance tonight of An Anatomie in Four Quarters. As you take your seats the silence is almost deafening with nobody seemingly brave enough to utter a word as you wait in anticipation for something to happen.

The Week 53 website of which this production was a part of describes the performance so much better than I ever could. “Set to an original score featuring live strings, percussion and voice, An Anatomie in Four Quarters is a thrilling performance in which the magnificent anatomy of The Lowry’s Lyric Theatre is itself dissected. As an audience of just 200 people walk to different viewing positions throughout the theatre to experience the piece, examining what it means to open up and be opened.

This compelling visual poem features a cast of dancers, actors and musicians. As the audience change positions for each of the four movements An Anatomie explores the insatiable desire of human beings to get closer to things encouraging us to look afresh and celebrate the physical structure of the bodies we inhabit.”

Stunning, compelling, thought provoking, captivating, moving, you can throw all these words into the hat to describe this most perfect piece of theatre. Beginning with whispered words from behind before the original score begins to fill the theatre, the vast Lyric stage lit only in white light. The only colour coming from the clothing worn by the 10 principle performers. The lighting on stage is as precise as the movement upon it.

There are times throughout this production where you don’t know where to look with dancers appearing in the lighting grid above the auditorium and on platforms placed within the seating areas unseen due to the darkness until they are bathed in white light. It truly is stunning.

As the performance continues the audience are moved to various points within the theatre, beginning in the “gods” the cast on stage look miniscule and grow in your eyes as you are moved down to the circle, then stalls before finally being invited up onto the stage to wander through them as you take your seats at the very back for the final quarter of the show. As each quarter begins more of the cavernous Lyric stage is revealed to the extent of by the time you reach the stage all the black curtains have risen out of view and all that is left are a number of lighting towers illuminating the bare walls of the stage and performers. 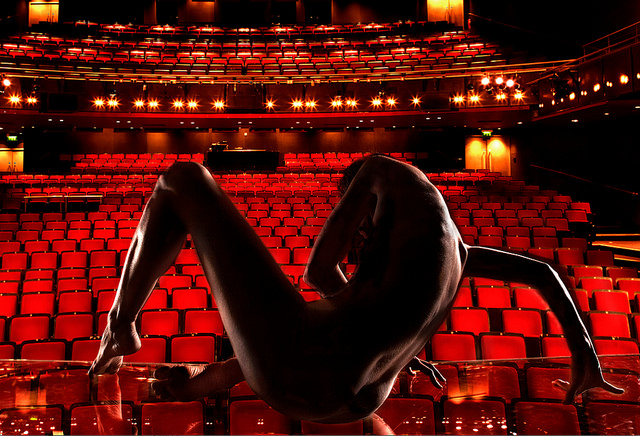 The sound design for this show is a masterpiece. At no point during the evening were you without some sort of audio accompaniment, there were even speakers positioned at the base of the fire exit stair wells you are guided down from level to level to maintain the emersion of sound. The sound engineer Andy Evans deserves huge praise for this.

A huge part of this performance was music. And as well as some of the score being pre-recorded we also witness 11 members of the Manchester Camerata playing both in the orchestra pit and on stage along with drummer Vanessa Domonique and Bass Guitarist James Keane in different quarters.

I am still struggling to find the words to sum up just how good this performance was. The sound, the lighting, the music, the dance and the spoken word was mesmerising throughout. Clod Ensemble have produced something very, very special here and if it doesn’t end up winning awards then there is no justice in this world.

Week 53 is a festival of innovative, provocative national and international work in a series of spaces including areas of our building normally off-limits to the public. It's about rewarding the compulsively curious as we challenge convention and celebrate creativity. The festival runs until the 8th May at The Lowry. http://www.week53festival.co.uk/