Review: The Two Mikes @ The Lowry

Tonight The Two Mikes brought their mad cap zany show to The Lowry. Sadly it just didn’t work for us, filled with gratuitous humour from the beginning, at times it made for uncomfortable viewing.

The show started with a short film introduction on the big screen before the Two Mikes were escorted onto the Lowry stage by what appeared to be a pointless gratuitous female. The first half consisted of a minefield of insults at each other and numerous outbursts of heckling from the mainly male audience. Parry's stock retort being "That's a bit harsh".

Parry comes across as a bumbling guy with little geographical knowledge and Graham as a bitter sidekick. Parry frequently refers to his health as they chat generally, sometimes forgetting they have an audience in front of them.

The second half starts with Parry on the big screen doing the cinnamon challenge (look away if you have a sensitive gag reflex). Next up Graham joins Parry on stage to host a quiz night. The quiz is another chance for Graham to throw insults at Parry who reciprocated many times. With 10 minutes left in the show a big countdown clock appears on the big screen and audience questions are taken. This served as a bit of light relief for us as it meant the evening was nearly at an end.

The big screen used throughout the evening to show pictures and the odd video all seemed very amateurish and more care could have been taken on the timing. This is definitely a show for those who follow the TalkSPORT show, and not as one would have expected, banter about SPORT!

For us the show is largely unfunny and not for anyone who is looking for banter about sport. It may well be the case that the Two Mikes are better suited to the radio and leave their stage careers behind them. 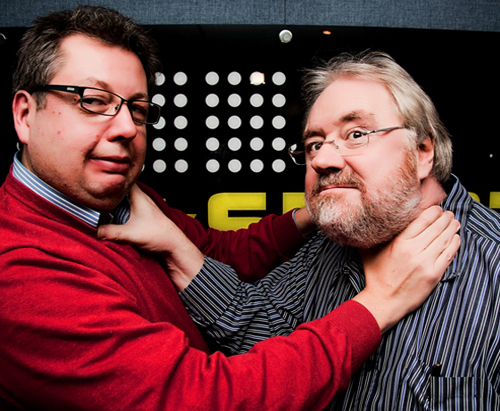