At the outset, the first thing to note in this production is the commitment by the actors to all the very energetic roles, for a full 90 minutes, with no intermission. An appreciator of theatre, and certainly those who have ever acted before, should be able to understand the stamina it takes to maintain focus in a role for this long, especially these roles. The second thing to note was my complete fascination and immersion in the show, for its entirety.

Aptly named Naughty Corner Productions present this, the third brain child of writer-director Mike Dickinson. Dirty Glitter comes after the very successful ‘The Bastard Queen’ and ‘Not the Horse,’ both of which were highly acclaimed by critics, the North West over. This latest, with so much pressure resting on its glistening shoulders, does not disappoint.

As the audience mill about, finding their seats and settling in, I notice the cast, standing in tableau upstage; they probably had been for a good twenty minutes and were still steady. As the lights went down, a spot came up on Michael Longhi, Vince Rubell himself, centre stage, basking in his sordid glory.

But the plot does not begin with him. Set at the height of disco in 1979, this ‘neon-noir’ follows private investigators Murphy and Valmont as they try to find a missing girl, suspected to be murdered. The trail leads down a winding path, littered with drugs, debauchery and all the dirt going down at nightclub ‘Les Fleurs.’ This comedy-thriller gets most of its laughs from the dynamic pair, who work with each other altogether seamlessly. Niall Hogan is hilarious in his portrayal of insecure but gutsy Valmont, in everything from his fashion sense, his dancing, to his detailed facial nuances that make his performance a pleasure to watch. I’m sure I won’t be the only one to comment on one particular scene where, after being the subject of innumerable jibes on his height, he spent the best part of 3 minutes flying over everyone’s head. I can’t possibly spoil this for anyone with a ticket much more than this, except to say that it’s a colourful experience that would be criminal to miss. 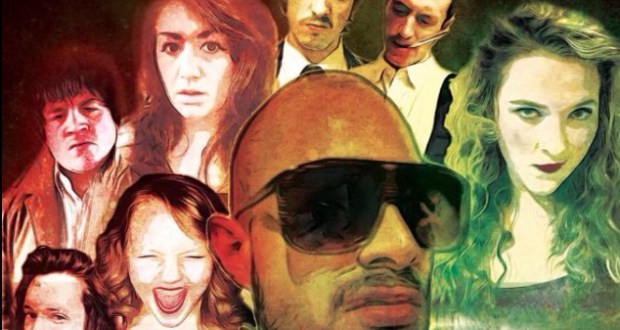 Michael Hawkins plays Murphy with intensity. He brings the straight laced figure to life with a convincing and entirely natural performance. Murphy is played as someone instantly likeable; much of a father figure and guiding hand to Valmont. The audience sympathises with Murphy for his tireless toleration of the easily led Valmont.

I have had the privilege of seeing Samantha Walton perform on a few occasions. Infectiously funny by nature, it was a surprise to see her take on the roll of hardened Minnie, a straight-talking, no-messing moll of gangster Vince Rubell. There is a level of skill to be applied to portraying frustration, infatuation and fear all at once, and certainly Sam accomplishes this unflinchingly.

Michael Longhi as Rubell is a force to be reckoned with as he completely transcends his depiction of the power-maddened drug baron. Alongside him, it’s hard not to pale in this large shadow, however Jemma Lynch as his deceptive bit-on-the-side is definitely up to the challenge. I’m sure there were laughs in rehearsals, but not tonight; Jemma is intrepid in her role.

No body, I’m sure will ever forget Toni Garcia Romero as Joe, alias Jose, ever present, never sleeping bartender, barista, waiter in every establishment. Gravity doesn’t apply to this guy, as he leapt and pirouetted across the stage, but even aside from that, his comedic performance might have been one of my favourites. I hope to see him again many in other productions.

Adam Nicholls as ‘Big Dick’ Dave Shield, Texas ranger-style law-keeper is also very funny, but I have to credit Dickinson as a writer for bringing this character into such amazing plot twists. Nicholls’ accent gets laughs and is sustained throughout, which is great, despite not getting full marks for full authenticity.

A role not to be forgotten is that of Moe, played by Megan Bond. I spoke with Megan after this debut performance and she might have been in a state of shock—seeing her on stage as Les Fleurs regular, revelling in all the snow white limelight, you wouldn’t know of her inward nerves at taking on a role so apparently different to what she’s taken on before.

Callum Forbes as the little-talking Bug left me speechless. I can’t fault him. Go to the show to see what I mean!

Trusting relationships between all actors are a joy to see on stage, and are a compliment to Mike Dickinson’s direction. I don’t feel like there could have been any better ensemble to showcase this gritty, surprising and thrilling piece of theatre. If you for some very unfortunate reason don’t or didn’t catch them at Liverpool’s Unity Theatre, they’re all heading to the Edinburgh Fringe Festival this August for the entire month, as a resident company production with The Space UK.