Review: Ministry of Science @ The Lowry

The show begins with the voice of the X-Factor, Peter Dickson booming out with an introduction to a number of great inventors and scientists. Then the bubbly duo of Mike and Emma enter the stage from the Ministry of Science. Unusually for a stage production you are encouraged to take photos of the show and to tweet them to the Ministry giving you the chance to get goodies in the post.

Mike and Emma then take us through a fun and educational journey through the scientific world. Mike providing some cheesy jokes that the kids appreciate along with the big kids in the audience!

In the performance we saw the first group of kids on stage really got Emma giggling so much so she struggled to regain her composure and and Mike had to bail her out (this added to the hilarity especially for the adults).

The shows is packed with facts that grown-ups will both know and will educate them. The kids learn whist having fun so don’t even realise they are learning. If your child hates bangs then be prepared to cover their ears especially early on when a couple of loud bangs are heard. After the two early bangs Mike and Emma do warn you.

The effects from the Liquid Nitrogen will amaze young and old alike. In the second half all of the kids have the chance to join in when glow sticks are explained (glow sticks are on sale before the show and at the interval).  So if you have some glow sticks at home take one along.

The second half also sees an adult invited on stage to make a smoothie so if you are a shy parent strap your child down. A huge canon will really get the kids going as they try to catch foam balls and plastic bottles. With a finale giving the biggest bangs of the show, making you jump out of you seat, this is most definitely a show for the kids, but adults will enjoy it also.

The show lasts around 90 minutes plus the intermission to allow for toilets and glow stick purchases!!! 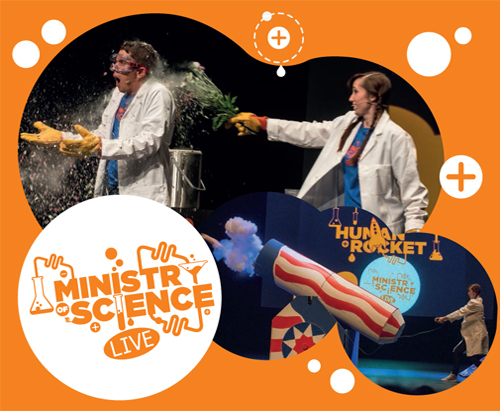