Teatro Pomodoro present Resurrection Half Price, an original piece that draws on physical theatre, buffoonery and the avant-garde. It aims to portray the passion of Christ and his relationship with his mother but with modern sensibilities and with a generous nod to the trailblazers of alternative comedy, Monty Python, but with a flavor of Europe.

Teatro Pomodoro are Simone Tani from Italy and Carmen Arquelladas from Spain; they both come with a wealth of experience in the arts. They state, “When creating a piece we start with a theme or statement, then we begin exploring images and a voice in response to them. We look at the situations from different points of views, and expand on questions that come from societies rejects. We are also looking to create theatrical experiences where we involve, and arouse, laughing from the audience as well as a sickening feeling that they are not innocent.” 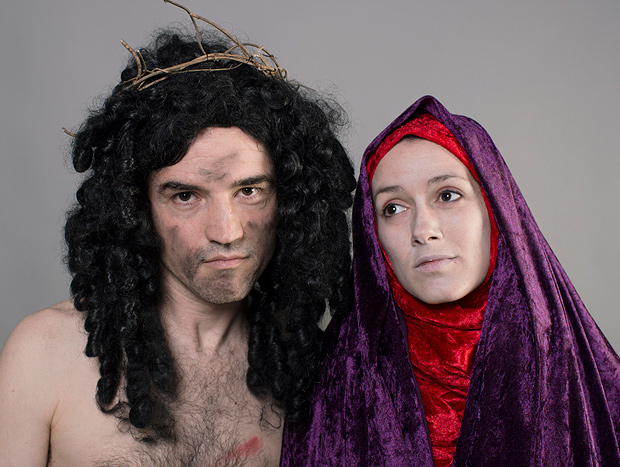 Tonight’s hour long performance was an experience I find hard to describe and therefore review. I was looking for a narrative thread in the performance and this was very thin. So I examined it as a series of loosely connected scenes using the iconography of Jesus and his mother Mary and this was a helpful construct. Some may call it sacrilegious but it didn't mock or disparage Christianity instead it looked at the iconic figures of Jesus and Mary from a surreal angle. It took a while for the audience to grasp this but once they saw the joke the laughter ensued.

The piece started and ended with the Pietà, the Virgin Mary cradling the dead body of Jesus, a classic subject of Christian art most often found in sculpture. However, we begin with Mary crying and Jesus asking if he could have a break and go on holiday! It ends with Jesus crying and Mary slapping him! In between these two images the audience were taken on flight of fantasy into the bizarre and the ridiculous as Jesus flew by Angel Airways to a Paradise holiday destination, walked on the pool, strutted his loin cloth on the dance floor and enjoyed the sun and the surf. Amongst this was ‘The Last Supper’ by Leonardo Da Vinci - the growing realisation that rippled through the audience as to what was being created on stage was a particularly funny experience.

Resurrection Half Price was a bizarre and surreal experience that didn’t entirely hit the mark for me but there are worst ways to spend an hour.