Forced Entertainment bring us a story for all the family, told to us tonight by Claire Marshall and Cathy Naden. “Are you sitting comfortably? Then I’ll begin.”

That is very much the tone of the performance, an old fashioned storytelling, an art that goes back to before recorded history. This performance involves some audience participation, some musical interludes, live sound effects and animated projections. The sound effects are made on everyday objects and the projections are ‘caught’ by the performers on pieces of cardboard, creating a very homemade feel to the piece that fits perfectly with the delivery.

This venture was a collaboration between Forced Entertainment and Theater an der Parkaue in Berlin to create a German language version of The Possible Impossible House, the company’s first ever show for children and young people that premiered at Barbican, London in December 2014. 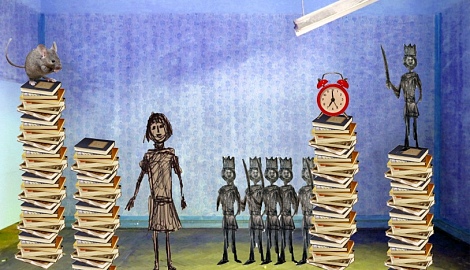 It is definitely aimed at children and the little asides to the audience, the ‘arguments’ between Claire and Cathy were slightly overacted but they did raise a few titters from them the adults present. Cathy took on the role of the older sister, telling the main part of the story while Claire was the “helpful” younger sibling adding sounds and checking that the story was being told just right.

The children on the other hand, on the most part were enthralled. They dispelled their disbelief and went on the very convoluted journey of the story - much like the stories that children themselves tell or write. They spoke to the characters, remembering to be ever so polite, saying their hellos and goodbyes. The front row was especially engaged and because they had they space I saw at least one boy dancing with the soldiers in the ballroom!

Overall it was a very sweet 70 minutes of storytelling, with a delightful ending. Children left with glowing faces and their parents smiled. A delightful delivery with some simply sweet storytelling. If you have a child under 7, or you can get one (legally of course!) then take them along to see this show.