Bad Jews written by Joshua Harmon enjoyed its premiere in the summer of 2014 with great reviews it extended its run to the West End Arts Theatre where the rave reviews continued.

Directed by Michael Longhurst the play is based following the death of a beloved grandfather 'Poppy', and a treasured family heirloom with religious significance is in the sights of his three grandchildren.

The play was delivered in the Quays Theatre of the magnificent Lowry where no microphones were used making the setting intimate and intensely captivating. Joshua Harmon stated that bad Jews came into existence because one day in 2004 he just thought of the title when it popped into his head, it was irrational and unplanned and it took him seven years to actually sit down and write the play.

The title may make some people uncomfortable but in Harmon's mind it's a self-ascribe word used by many Jews for biting into a slice of bacon, or eating on Passover and in his words usually food related, it was not meant to offend anyone. Bad Jews considers a very specific generation of Jewish people living in a very specific time and place, but by being incredibly specific taps into something that is universal. 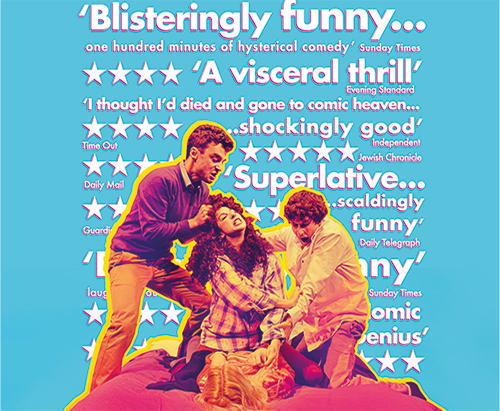 Poppy their beloved grandfather was a survivor of the Holocaust with his number tattooed on his forearm it reminded the whole family of his suffering and loss he had endured during the war. Poppy had worn his 'Chai' and necklace symbolising the Hebrew word 'living' ever since his survival of the concentration camps where he lost the whole of his family. With nothing of value to his name he had used his Chai as an engagement gift on proposing to his future wife (Grandma) until he was of a status to buy her a ring hence having a huge significance to its legacy.

With the death of poppy the last member of a generation to die a natural reshuffling takes place and a new order is established. Poppy's legacy is meaningful to all of his three grandchildren, but he didn't stipulate who would get possession of the Chai that most embedded his past and existence.

The three grandchildren were played by extremely talented actors and actresses. Jonah the youngest grandchild was played by Jos Slovick the quietest member of the clan who didn't want to commit to anything or offend anyone and he preferred not to get involved but was constantly placed in the middle of the two feistiest members of the grandchildren. Liam (Shlomo) the eldest grandchild played by Ilan Goodman a wealthy gentlemen who had just returned from skiing with his non-Jewish girlfriend and Daphna (Diana) the only granddaughter was played by Ailsa Joy a bossy, overbearing, fanatically religious lady.

The stage setting was based in Liam's Manhattan apartment which was beautifully designed by Richard Kent, held the four characters in an unescapable area to where they viciously brawl over their family, faith and legacy.

All characters told their tales and express their views through hilarious and sometimes deep dialogue. The script is fantastic and very cleverly written, you laugh, cry and times are shocked by the twists and turns as the plot unfolds.

The play is brilliantly brought together by the lovable character Melody played by Antonia Kinlay the non-Jewish member of the four. She is a stereotypical empty headed blonde and a failed opera major with an awful voice who brings light-heartedness to the play with her brilliant but excruciating rendition of Gershwin’s summertime. In contrast to the concentration camp numbers on the grandfathers arm, Melody Sports a Treble Clef tattoo as to never forget how much music means to her.

The grandchildren are passionate, and they are angry and hate a lot of the choices their counterparts have made with their lives. Certainly here their hate comes from a deep love they had for their grandfather, and they actually only hate the idea that his legacy would fall into the wrong hands but the underlying motive is love. Liam sees a Chai as an emotional talisman, representing the continuity and love of family life where as Daphna sees the Chai as a symbol of survival of the Jewish faith.

This play looks more universally at grief, loss and legacy and how easy it is to lose sight of other people. It is definitely a must see play offering a night of verbal firepower and vicious banter that captivates the audience throughout, it is an exhilarating gritty touching play.