The Herbal Bed - The Lowry, Salford

The English Touring Theatre, in association with Northampton's Royal and Derngate and The Rose Theatre make a very bold and confident statement with their latest co-production currently being performed at Salford's Lowry Theatre; The Herbal Bed by acclaimed playwright Peter Whelan.

The play is set in Stratford-Upon-Avon in 1613 and is based upon the real events of Susanna Hall, Shakespeare's daughter, being publicly accused of adultery and the shame and scandal this has on them and their community, especially when the trial is held in Worcester cathedral, and set against the backdrop of her worry about her ailing father's health.

I cannot deny that this is a very well produced and enjoyable piece of theatre, and indeed the majority of last night's audience thought the same too, leaving pleased that they had had a pleasant evening's entertainment. On that level I wholeheartedly agree with them. It was indeed a splendidly put together piece of non-challenging, easy-watching entertainment with a few laughs along the way. The Herbal Bed is the poor man's Crucible. [I simply couldn't help comparing this play to a very similar but much more well-known and celebrated play set in a similar period, again involving scandal and a court case with Puritans.] 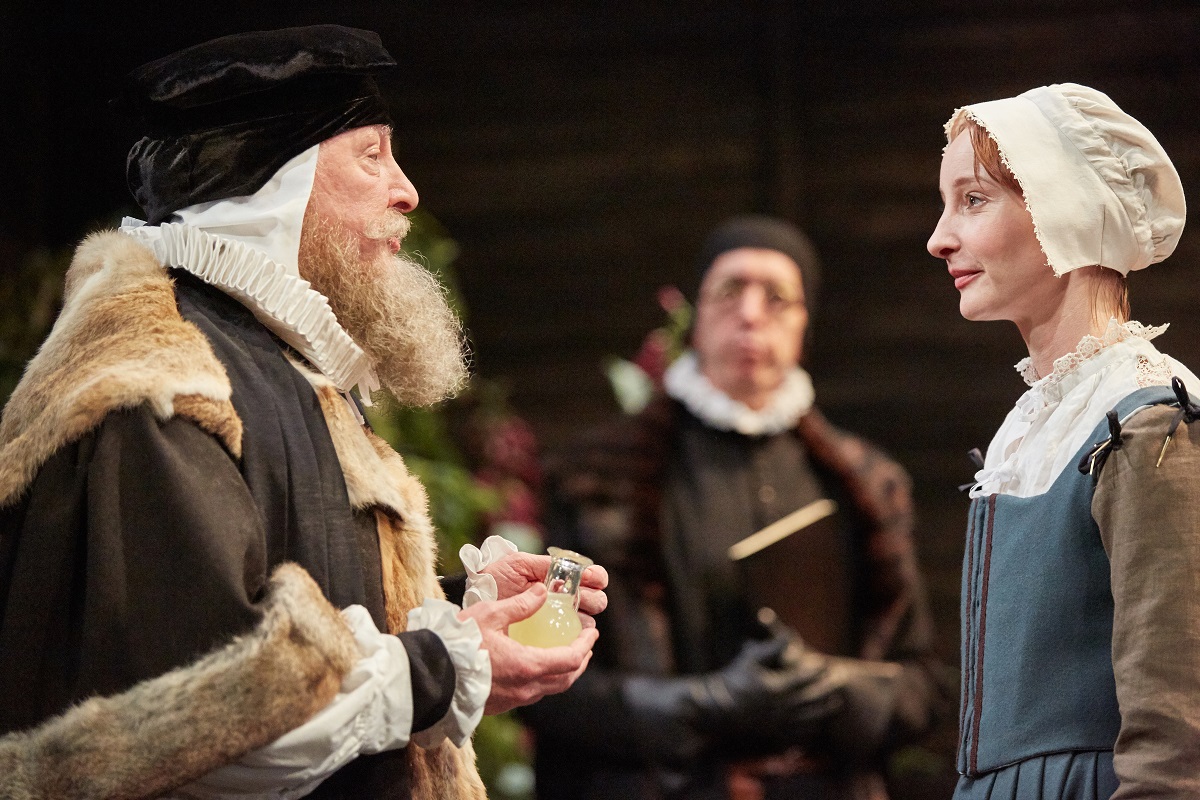 Strip away the veneer though, and I found a completely different story. Advertised as 'a powerful thriller', then those going on that premise will be more than disappointed. The play offers no change of dynamic all the way through, and just happily continues down the middle road, pulling all of its punches and offering no surprises. It does, to some small degree, give you opportunity to 'take sides' as the accusations and trial unfold, as we see characters change their spots, dissemble and lie, in order to maintain the balance. A drunken friend makes a jealous remark in a pub and this is the catalyst for the whole unravelling, as maid, and protagonists tussle with their knowledge that sometimes it is better to lie for the good of the whole. We all knew, however, right from the start there would be a happy ending; that was never in doubt. Further to this, then the play really didn't actually get started properly until the second act. Act 1 was all introduction to character and situation.

The set, designed by Jonathan Fensam, however did work extremely well and, although very unsure at the start, once it opened up into the garden itself, I was sold. The transition from garden to cathedral and back was seamless and I loved the austerity of the cathedral interior. The lighting, by Malcolm Rippeth, was most complimentary to the moods and situations, and was, although not too complicated, excellently designed and executed.

The acting, in general, was of a very high standard, although I did get the feeling that some were trying just a little too much and therefore it came across somewhat false and 'acted' rather than truthful and real. This was especially apparent in the antics of Jack Lane played by Matt Whitchurch, and much less so, but still present in Susanna Hall played by Emma Lowndes. Both are truly fine actors that much was clear, but I felt they were pushing just a little too hard last night.

Truthful and fine performances were present last night though. Philip Correia (Rafe Smith) and Jonathan Guy Lewis (John Hall) both impressed me with their earthed sincerity and acting without any adornment or pretension. With Michael Mears as Barnabus Goche finding much evil relish in his supercilious and slimy portrayal of the English Church Court's equivalent of a Spanish Inquisitor General.

The accents I found rather odd, since they weren't consistent and seemed to lessen as the play progressed, and the directing, by James Dacre, was decidedly stagy and contrived at times. It is though, nevertheless, a worthy piece of theatre and an enjoyable evening's theatrical viewing with some rather nice costumes and authentic looking props.