Where My Wellies Take Me - The Lowry, Salford

Where My Wellies Take Me is the story of a sunny Mayday through the eyes of 9 year old Pippa who is staying with her Aunty Peggy.

Unfortunately for this afternoon’s show Michael's wife Clare was unable to join him on stage due to illness, also missing was Natalie Walter a 9 year old actress who normally takes the part of Pippa, she also had been struck down by the flu bug and was unable to speak. Michael therefore assumed the roles of himself, his wife and Natalie, this resulted in a loss of feel for the performance.

Michael was supported on stage by the outstanding voices for the musical parts of the tale by Voices at the Door - a six piece acapella group consisting of; Barry Coope, Jim Boyes, Lester Simpson, Fi Faser, Jo Freya and Georgina Boyes.

The story told with feeling by Michael Morpurgo who was born in St Albans, Hertfordshire in October 1943 and became the British Children's Laureate between 2003 and 2005, is based on the real life memories of Michael's wife Clare's experiences as a 9 year old child. The heroine of the story is 9 year old Pippa and starts with Pippa's song, wonderfully sung by Voices at the Door, and is set on a sunny Mayday and Pippa reveals that she dislikes Mayday races. The story is intertwined with Poems by numerous poets from Shakespeare to Sean Rafferty and songs from Voices at the Door. Pippa details her journey along the countryside following where her wellies take her. Passing through the farmyard of Farmer Yelland and eating sticky buns. Eventually returning to the village for an exciting end… 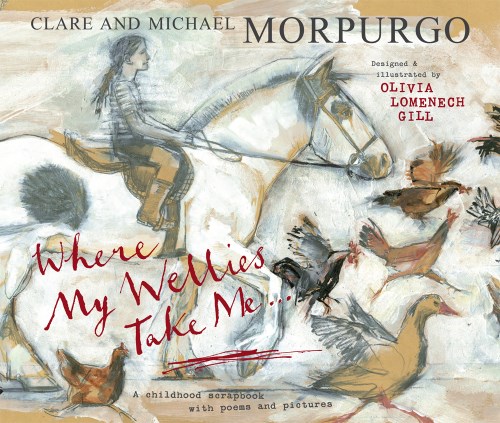 Michael was educated in Central London, Devon, Sussex and Kent. Following his education and graduating with 3rd class degree, he attended the Royal Military Academy Sandhurst. His next role was to take up teaching in a Kent Primary School and along with his wife Clare he established Farms for City Children in 1976. In 2014 he was shortlisted for the CILIP Kate Greenway Award.

The book of Where My Wellies Take Me was illustrated by Olivia Lomanech Gill. Michael is probably best known for the fantastic story War Horse which was brilliantly adapted for stage using life size puppetry and I feel that to capture more of the children in the audience some of this style of interaction would have been good. My son who came along with me and is 9 found parts of the tale funny and the use of words like bum, and fart really appealed however he was left a little bored by the amount of singing and words all coming from one person. It may be better when both Clare and Natalie are also present giving the tale a little more life but the use of images especially in the situation Michael found himself in would vastly improve the performance.

A few children in the audience were visibly feeling the same as my son especially those younger children. I would love to see this show again when all participants are present to see if they improve the experience. To have read the book may also enhance the experience.