Towards the end of Strauss’s operetta the Prince declares that “chacun á son gout!” (each to their own taste) something that was definitely the case at this performance of Die Fledermaus at the Manchester Opera House this evening. Whilst the majority of the audience found amusement in the casts farcical interpretation and presentation the performance never quite lifted to the dizzying heights of some of its well-known arias.

This revival of Ellen Kent’s 2006 premiere of the English version of Strauss’s German original is brought to life by cast of Moldovan opera stars, supported by amateur performers from local Stagecoach Theatre Arts schools. Kent’s translation (with previously unseen scenes reinstated from the operetta’s Russian version – stay with me!) attempts topicality succeeding in its references to local celebrities (such as a tenor from the Manchester Operatic Society and Sir Alex Ferguson) but failing to be as biting or as humorous as the plot has the potential to be. Ruth and Thomas Martin’s lyrics are equally clunky, although they have the benefit of Strauss’s sublime music which tends to lift them. This lack of sophistry in the lyrics is, perhaps, due to the issue faced when translating a lyric and attempting to maintain the scansion and rhyme structure of the original. 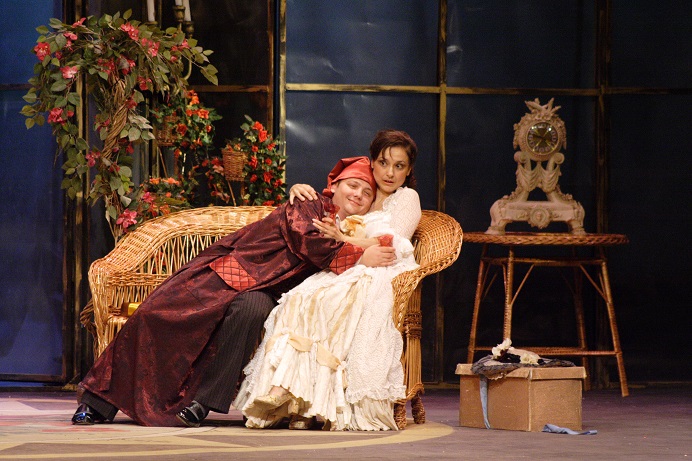 The show’s strengths lie in its music. Vasyl Vasylenko ably conducts the orchestra; their zesty performance of the overture being a highlight of the evening with Vasylenko’s baton periodically swooping into view providing the only visual stimulus during this aural treat. Strauss’s soaring melodies are accompanied by the ubiquitous rustle of sweet wrappers, which echo in the Manchester Opera House’s auditorium, a theatre with a strange acoustic like many of its contemporaries. However, even this added percussion does not detract from the Waltz King’s work. There are clever nods to other operas and well known classical repertoire; and even a snippet of the Beatles classic ‘Let It Be’, perhaps a tribute to the late Sir George Martin. It is also a delight to hear music that resonates without amplification – indeed the only pre-recorded music in the show, which accompanies the accomplished Indian dancer Devika Rao in a – perhaps overlong – mystery guest slot, feels a tad jarring by comparison. Irie Gisca’s lush baritone is particularly memorable coupled with perhaps the strongest acting skills of the ensemble to add depth to the show.

In a show full of all the classic mistaken identity, disguise and high jinks that we expect from this kind of piece there needs to be solid acting, and whilst the central protagonist Rosalinde declares that: “My acting will deserve an Oscar!” the reality couldn’t be further from the truth, making you wish for singing in the spoken scenes. It is also an odd decision to provide surtitles for the English lyrics and dialogue (sometimes very helpful when faced with the heavily accented delivery of the cast) but to not use any surtitles when the characters’ sing in a different language; aside from [sings in Russian’]. The amateur performers provide bulk for the chorus numbers but the staging and choreography (where are the waltzes?!) fail to fully exploit the potential of these additional bodies on stage. On the whole Kent’s production is enjoyable but lacks the fizz of the champagne (Moldovan of course) that is ultimately blamed for the evening’s shenanigans.