The intrepid adventurers’ quest unfolds on stage on their hunt to find a bear; as they wade through the gigantic swishy swashy grass, the splashy splashy river and the thick oozy, squelchy mud! 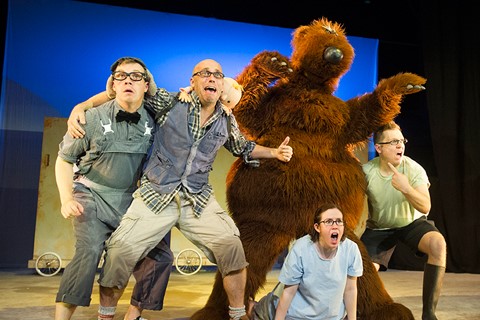 Adapted for the stage from the modern classic written by Michael Rosen author of over 140 books and illustrated by Helen Oxenbury a renowned illustrator of many classic picture books. ‘We’re Going on a Bear Hunt’ since the start of its first UK tour in September 2008, has been enjoyed by thousands of primary, nursery and pre-school children. Which is easy to see as the show is beautifully choreographed and is complemented by catchy songs, interactive scenes and plenty of hands-on adventure – plus a few special surprises!


Tom Wainwright (Dad), Rachel Gay (Girl), David Shute (Boy) and Niall Kerrigan (Dog/Musician) are captivating performers, who magical held the attention of a full auditorium, entertaining ages from very small preschool children to accompanying grandparents. Its fast paced action packed scenes had the little ones running through a range of emotions, from giggling delights of silliness and water spraying to white knuckle anticipation of finding the bear.

This show is recommended for ages 3+, and has a running time of approx. 55 minutes. Perfect for entertaining the little ones over the school holidays and my accompanying three year old loved every minute. I must say some of the scenes that are brilliant at whipping the audience into a sense of anticipation are a little scary for the smaller members of the audience and a few tears were shed in fear, although this was soon rectified by the very funny dancing (not so scary) bear that followed.