This show is a fusion of ideas, genre and companies. A synergy of real life responses from young people in Liverpool and London, live music, dance, beats, puppetry, music and theatre. I didn’t know what to expect but I was blown away by what I experienced.

It was birthed last year from workshops with young people in Liverpool and London, led by the performers Jack Hobbs aka Hobbit a beat-boxer, Ryan Harston aka LoGisTics a dancer, Elisha Howe aka Electric a singer/poet and Mohsin Nouri a puppeteer. Under the direction of Keith Saha from 20 Stories High, a youth theatre company that engage disaffected and excluded young people in the arts; and Sue Buckmaster from Theatre-Rites one of the Uk’s leading theatre companies making work specifically for children.

Tonight’s performance was billed as a gig/theatre experience. It was a jigsaw of songs, rhythms, beat and loops; stories, poetry, physical theatre; dance, puppetry, multimedia, and so much more. In the 70 minutes that elapsed on stage we had moments of laughter and fun with the Boombox Boy; times of tears and terror with the Paper Girl and passages of pathos with the Hooded Boy. These were all puppets expertly brought to life by the cast. They inhabited that magical space on stage when an audience dispels disbelief and allows the inanimate to have life. The audience and the performers breathed life into these faceless characters and we saw them. In so doing the performers were able to get to think about the political landscape that young people face, issues of self-harm and sexual abuse and those young people who don’t feel they have a voice. 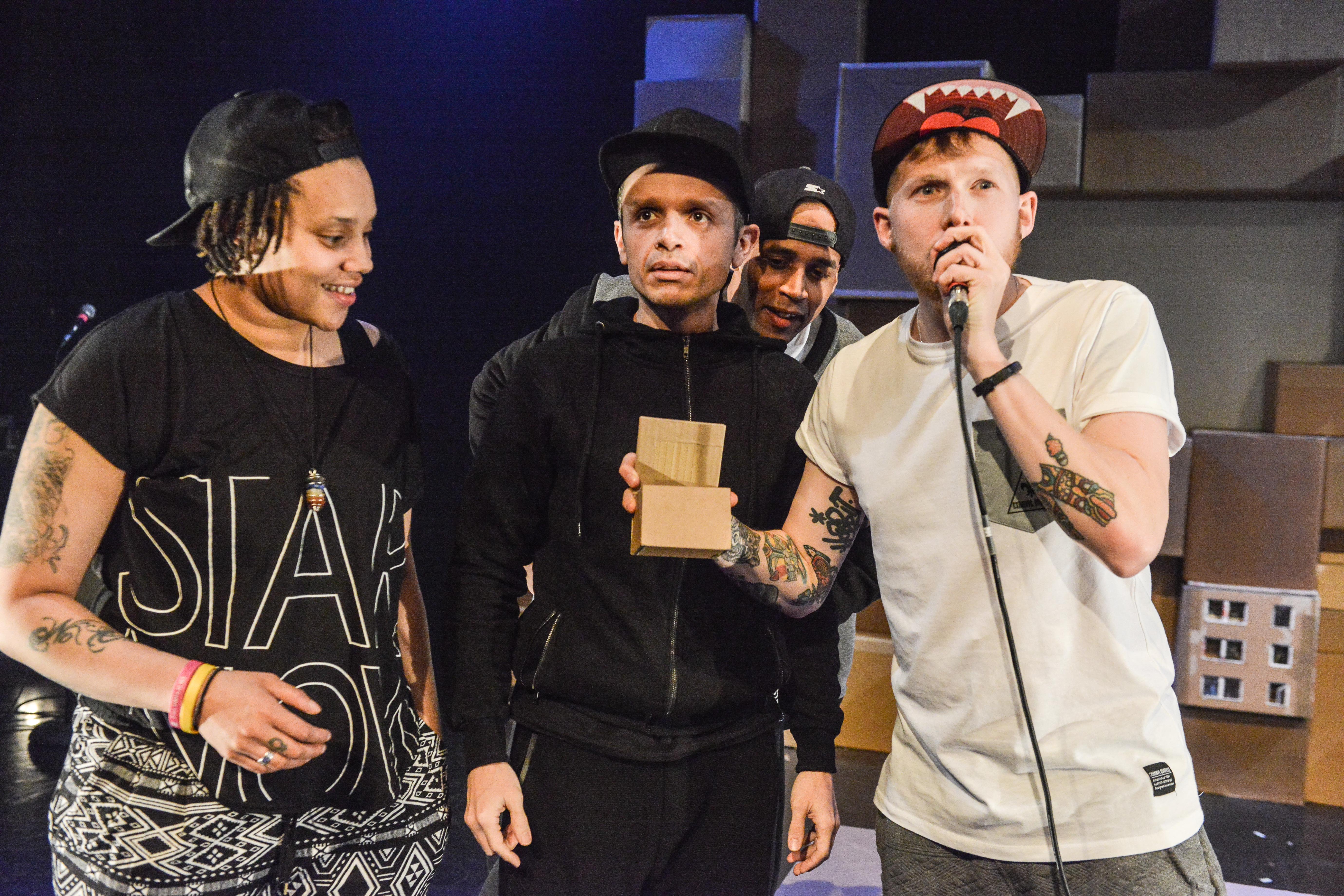 We also heard the story of Jack, in a fusion of dancer and puppet. A character who lived for what he could get from life and got more than he bargained for. A very powerful story unpacked for the many boxes that formed the backdrop, scenery and prop for this evening’s performance.

I didn’t know what to expect from tonight’s experience and in many way I thought I wasn’t the target audience. I thought this was the voice of the younger generation for that generation and it definitely resonated with the audience who were predominately 18-30. But this also impacted me. This was a voice of a generation who wanted to be heard, of young people who were trying to find their identity and who were overcoming immense obstacles and hardships. I was deeply moved on several occasions.

But there was another voice, a voice that was optimistic and defiant that said, yes we may be Broke and we may be Beat but we aren’t Broken and we’re not Beaten! This is theatre at its best, it was raw, it was thought-provoking and it had a message that needs to be heard. It continues at the Unity Theatre until the 13th February before touring across the UK.